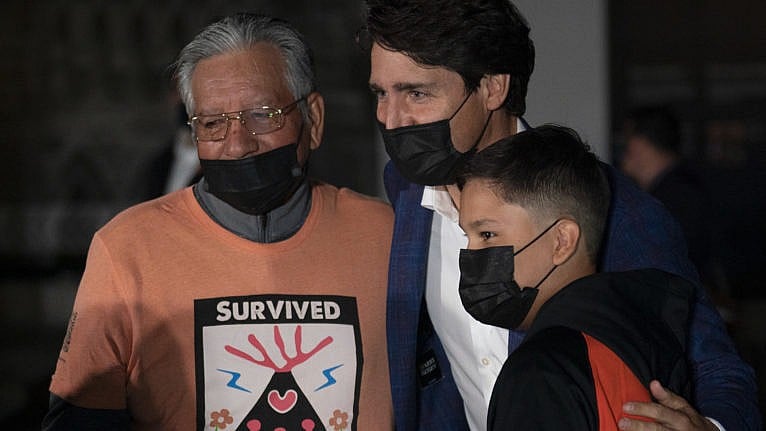 Yesterday marked the first National Day for Truth and Reconciliation commemorated in conjunction with the Orange Shirt Day that has been marked for several years, and Drew Hayden Taylor wrote an evocative and unsparing essay for TVO about how the true meaning and necessity of the day is located “six feet deeper” than the unfathomable loss and erasure we see on the surface:

Like most, if not all, nations in this world, we believe we have a responsibility to our children. Part of that duty is to remember them, especially when the rest of the world has pretty much gone out of its way to eliminate that memory. Other than their deaths, this is probably the worst crime: trying to tell us they didn’t exist.

Prime Minister Justin Trudeau, meanwhile, landed in hot water for heading off to Tofino, B.C. for a few days’ vacation with his family, rather than being in Ottawa in “private meetings,” as his official itinerary indicated. His office defended the trip by pointing out which activities related to the day he had taken part in. “Following his participation in last night’s ceremony marking the first National Day for Truth & Reconciliation, he is speaking today with residential school survivors from across the country.”

Will they or won’t they? The question hovering over the Conservatives’ potential desire to defenestrate Leader Erin O’Toole following the federal election (and before another that is likely not too far off) is one of the big political stories at the moment. But on Thursday, the party’s president said that one member of the national council who started a petition—within hours of the election results being clear—to recall the leader risks being booted for not advancing the best interests of the party. Bert Chen, an Ontario representative, has said he speaks on behalf of the many members who feel “betrayed” by O’Toole shifting the party to the centre after running as a “true blue Conservative” for the leadership.

“Conservatives believe in integrity and we believe in accountability, so integrity means keeping true to your beliefs and what you’ve communicated that you will run on, and not changing them halfway through an election or on a dime,” he told CBC’s Power & Politics.

Dis-cons: In other discontented-conservative news, Alberta Premier Jason Kenney will face a leadership review at the United Conservative Party annual general meeting in April—earlier than the review that was originally planned for a year from now, but not soon enough for those who have lost confidence in him.

And Kenney is facing discontent from both sides, with some critics horrified by his determinedly hands-off approach as his province caught fire with the virus, while others are enraged by his eventual embrace of a vaccine mandate and reinstated public health measures. The Globe reported:

A message to members from party president Ryan Becker said that, while annual general meetings have traditionally been held in the fall, ‘given grassroots feedback’ the UCP’s provincial board has decided on an earlier review.”

Broken heartland: Still in Alberta, CBC has analysis of where and why the CPC lost substantial ground in that province in the federal election, tumbling from a dominant 69 per cent of the vote in 2019 to 55 per cent on Sept. 20, and losing three seats in the process. Certainly the unpopularity of Kenney is a factor as Alberta buckles under out-of-control COVID spread, but so is the difficult balancing act O’Toole attempted between keeping his base from rebelling while trying to appeal to more centrist voters. Ultimately, his party shed votes all over the place, to other parties and to the apathy of non-voters, CBC reports:

The Conservatives bled support to both sides of the political spectrum. The Liberals, NDP, PPC and Mavericks sucked up 263,000 more collective Alberta votes than in the previous election, while voter turnout fell nearly five percentage points, from 69.2 per cent to 64.5 per cent.

Moe problems: On Wednesday, Prime Minister Justin Trudeau spoke with Saskatchewan Premier Scott Moe about the province’s need for federal assistance as COVID cases and hospitalizations balloon, though news of the meeting didn’t hit the wires until Thursday. In an interview with the Regina Leader-Post, Moe seemed at pains to indicate that the situation was under control and his province’s needs were specific and limited, though the opposition NDP has been leaning on his government for more than a week to seek additional help.

On Thursday, the Prime Minister’s Office also sent out its own readout summarizing the call: “The Prime Minister reiterated that the Government of Canada remains ready to respond to any requests from the Government of Saskatchewan and encouraged the Premier to submit specific needs as they emerge. He committed to working with the province to provide additional supports to keep people safe.”

On Thursday, Moe booted one of his MLAs from the Saskatchewan Party caucus for “misrepresenting” her vaccination status. Nadine Wilson was first elected to represent the district of Saskatchewan Rivers in 2007 and recently served as deputy speaker in the Legislative Assembly. Moe said caucus members had been asked in the spring to report whether they were vaccinated or had made arrangements to be, and that seems to be where Wilson’s dishonesty came in, though she refused to discuss her vaccination status when the Saskatoon StarPhoenix came calling, instead saying that she had resigned from caucus because, “I can no longer support the direction of the Saskatchewan Party government or follow the government with true conviction regarding the current health situation.”

The story contains this incredible tidbit in its closing paragraph:

Wilson was not shy about advertising her purported vaccination status prior to that review. In a video captured on May 14, the last day of the spring sitting of the legislative assembly, she can be seen wearing an “I got my COVID-19 vaccine!” sticker while sitting in the chamber.