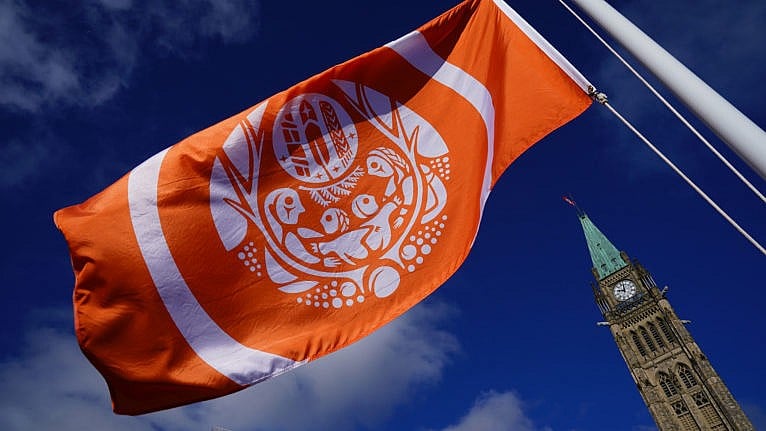 Today is the first National Day for Truth and Reconciliation, a new federal statutory holiday (with provinces under pressure to follow suit) that coincides with Orange Shirt Day, which has been unofficially recognized since 2013.

As the child of a white father and an Inuk mother, I was not allowed to attend. I stayed behind, home-schooled, and visited families where there was a palpable void. I was a stand-in, a well-loved substitute, for mothers and fathers who desperately missed their children. We all felt it. The sorrow of missing a part of our community.

In the Globe and Mail, Dakota Kochie writes that a national day to take stock of the treatment of Indigenous children couldn’t have come at a more needed time, and highlights the work done by the Truth and Reconciliation Commission (its executive summary is a must-read). In the Hill Times, Mi’kmaq Liberal MP Jaime Battiste speaks to the power of hearing Indigenous language in the House of Commons—but Rose LeMay has sobering advice for the freshly-elected class of MPs as they get ready for a new Parliament: “The Hill more often than not will protect itself over the lives of Indigenous peoples.”

Victory: Yesterday, the Federal Court upheld the Canadian Human Rights Tribunal’s 2019 decision ordering that compensation be paid to First Nations children (and some family members) affected by on-reserve child welfare systems since 2006; and to children who needed to go off reserve to access services or were denied services under Jordan’s principle. (Read the 2019 decision here.) The judge dismissed appeals by the federal government, which complained the tribunal was overreaching. PM Justin Trudeau, who spent last night at a Truth and Reconciliation event, will now face questions over whether his government will keep up that fight with further appeals.

Mark the day: Check out online programming at the National Centre for Truth and Reconciliation. You can catch Unreserved’s Rosanna Deerchild on CBC Radio One at 12 p.m. local time for a special featuring retired senator Murray Sinclair, who chaired the TRC. ICYMI, CBC also has a fascinating interactive report by Ka’nhehsí:io Deer investigating an Indigenous boy who died in residential school, and is running special coverage on TV and radio at 8 p.m. local. If you’re in Ottawa, the Remember Me walk to honour children and families affected by residential schools features a Parliament Hill opening ceremony at 10 a.m. and a march at noon.

Trudeau’s triumph: In the latest Maclean’s cover story, Paul Wells writes that the PM’s third victory will have real consequences. “Just because an election is close or divisive doesn’t mean it doesn’t settle big things. An election in which voters pass up a chance to choose change is still very far from being an election about nothing.” Trudeau has a mandate, among other things, to impose vaccine requirements in federal workplaces, trains and planes; a plan to triple carbon taxes; the go-ahead for a national network of low-cost daycare spaces. But, he writes, there are reasons that doesn’t feel satisfying:

So Trudeau’s victory is legitimate and impressive. It sets a distinct course for the country on things that matter. Why, then, do so many people feel the country isn’t any better off for having dragged itself through this campaign? Perhaps because the problems Canada faces demand realism and hard choices, and the dynamics of a modern campaign reward denial and emojis.

Double vaxxed or bust?: Bloc leader Yves-François Blanchet stood at a podium Wednesday and demanded a swift return of Parliament, less than a day after PMJT suggested it’ll happen at some vague juncture “before the end of fall.” Blanchet said as long as MPs are double-vaxxed, Zoom-based parliamentary sessions should go the way of the dodo. Unvaccinated Conservative MPs, if they exist (Erin O’Toole hasn’t said), should “stay home,” he said:

“Parliament should not come back under any kind of hybrid formation now we know that we can go on with the way this building is supposed to work, and we should not refrain from doing so because a few persons don’t believe that the vaccine works. This belongs to another century.”

Meanwhile in Ontario, some businesses are defying vaccine passport rules to welcome “all.” And meanwhile on the Internet, YouTube announced it is banning all vax misinformation from its platform—not just about COVID-19 jabs, but about other shots like the measles, mumps and rubella vaccine.

Crisis mode: The Canadian Medical Association is calling for new lockdowns in Alberta and Saskatchewan, the Canadian Press reports, as each province breaks its previous COVID-19 hospitalization records. This as Alberta Premier Jason Kenney faces question over his refusal to accept help from Newfoundland, and as current MLAs support a “Free Alberta Strategy” that would seek provincial veto power over federal laws. Don Braid, in the Calgary Herald, warns against dismissing the sentiments behind the fringey group:

Many Albertans will like this plan. Federal leaders should not ignore it. They need to offer real solutions for a province that is expected to wind down its major industry. So far, damn all.

Whither a coherent China policy? The commentariat is predictably imagining the scope of what a re-elected Liberal government should do about its relationship with China now that the two Michaels are home (and getting vaxxed). Despite some calls for the feds to “stop pussyfooting around,” Andrew Coyne reminds us in the Globe that Canada’s policy of “strategic pussyfooting” long pre-dated their arrest, and predicts it will continue for the foreseeable future.

Leave aside that China continues to hold more than a hundred Canadians, including Robert Schellenberg, sentenced to death for drug smuggling not long after the two Michaels’ arrest, and Huseyin Celil, the Canadian citizen and ethnic Uyghur who has been sitting in a Chinese jail cell since 2006. If we were unwilling to stand up to China for as long as the two Michaels were imprisoned, why would we be any more willing to do so while the others remain?

The Star’s Heather Scoffield offers an alternate view, foreseeing that most Canadian industries can gradually shift their business interests away from China. Canada finally has “some room to manoeuvre,” she opines, and can withstand more economic pressure from the Chinese government than we think. “As a country, we’re not as dependent as many would have us believe.”

Lastly, #HISLBV: For the uninitiated, that stands for “Harper is still lurking. Be vigilant,” a handy catchphrase tweeted by columnist Michael Harris in the wake of the 2015 election. We learned Wednesday that the former PM was found lurking on—er, heading up—the advisory committee for a Toronto-based company that’s looking to sell surveillance tech to the United Arab Emirates. Yet another trading partner whose human rights record leaves much to be desired.