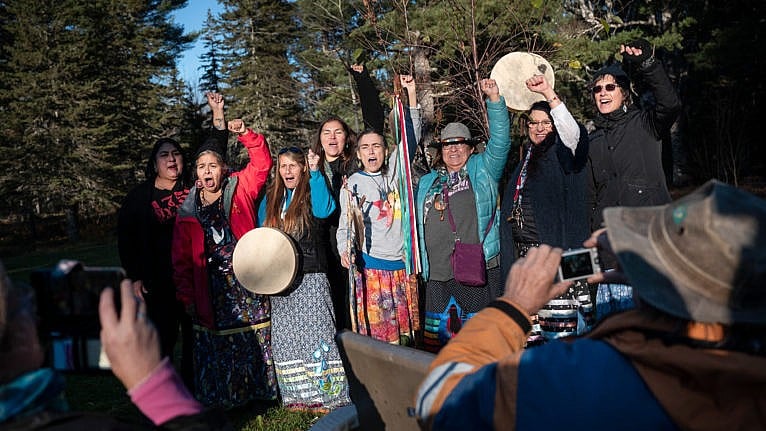 Cheryl Maloney’s eyes glossed over with tears as she stood near the bank of the Stewiacke River in the middle of Nova Scotia. The news was finally sinking in. Behind her, about 100 people filled plates with spaghetti and fried chicken; the crowd included her 11-year-old grandson, Drake Nevin, one of many children who’d spent most of their childhoods fighting alongside Elders to protect this river system. She saw the drift netters—white fishers who catch shad in these waters—reminiscing, and amber leaves floating on the water like confetti.

Two weeks earlier, Alton Gas, a subsidiary of Calgary-based AltaGas, had abandoned a project that would have pumped 10,000 cubic metres of brine into the mouth of this river each day for as long as a decade, leaving behind subterranean caverns where the company planned to store natural gas. It had been seven years since Maloney and a handful of other Mi’kmaq grandmothers had painted their first picket sign saying “Stop Alton Gas.”

There’d been a highway “slowdown,” where protesters handed out leaflets decrying the project. There’d been a threat of a civil suit, a court injunction against the protesters, arrests, court actions, decisions and appeals. Elders had died and babies had been born. Finally, the company tapped out, posting a statement on its website lamenting that “the project has received mixed support, challenges and experienced delay.”

It was a momentous win for an Indigenous community at a time when protests over pipelines have resulted in clashes with police and controversial arrests of First Nations protesters and journalists. Unlike in Wet’suwet’en territory in northwestern B.C., the elected local chief and band of the Sipekne’katik First Nation supported this fight, as did many local non-Indigenous residents. To Maloney, the widespread support reflected “the true spirit of reconciliation.”

READ: Autumn Peltier on youth activism, challenging Trudeau, and a future in politics

The Stewiacke River winds through forest, farmland and villages, including a Mi’kmaq community that’s part of Sipekne’katik nation. It eventually drains into the Shubenacadie River, which feeds into the Bay of Fundy, between Nova Scotia and New Brunswick. Twice a day, a nearly four-storey-tall surge of seawater—the highest tide in the world—pours into the rivers, causing them both to reverse course.

Alton Gas hoped to make use of this mixing effect. The company planned to pump water from the Shubenacadie some 12 km inland to flush out as many as 15 naturally occurring underground salt deposits, creating huge caverns to store natural gas. The resulting brine would be dumped into the Shubenacadie, whose already brackish waters push into the Stewiacke when the tide comes in. The company said it would closely monitor salinity levels in the river to ensure they did not reach harmful levels, billing the project as a reliable way to provide affordable gas to Nova Scotians.

Maloney, a former national environment coordinator for the Native Women’s Association of Canada, was sitting behind the bar in her rec room overlooking the river when her brother, Lefty Paul, first told her about it. She was flabbergasted. The estuary is home to endangered striped bass. She worried the project would pollute groundwater and the river system the Mi’kmaq had depended on for millennia.

“You don’t need to be a rocket scientist to know this isn’t good,” says Maloney. “They were going to use our small province as a guinea pig.”

Maloney put notices on social media to help plan the first day of resistance and, one windy morning in October 2014, she arrived with a few others at the Alton site. “Am I crazy?” she recalls thinking. “Is anyone going to show up? People are probably going to hate us.” But Elders started to trickle in, along with drift netters, older non-Indigenous men who opposed the project. About 100 people clambered up the steep bank of Highway 102 holding signs painted in red: “Stop Alton Gas” and “Protect our rivers” and “500,000 dump trucks of salt too much.”

Maloney, who has a law degree, knew the next steps had to be strategic. She helped organize a group to fish for eels at the site—a Mi’kmaq treaty right affirmed in two Supreme Court decisions—elevating the issue from environmental cause to constitutional matter. At every roadblock, she became more tactical.

MORE: The complicated history of building pipelines in Canada

When Alton created a new island in the river by digging a channel, members started fishing from it. When the company threatened to sue the band council for loss of income due to Maloney’s efforts to halt the project, Maloney, a councillor for Sipekne’katik at the time, resigned her seat so she could continue the protest as a private band member.

When Alton put up “No Trespassing” signs, Mi’kmaq and non-Indigenous allies built a “truckhouse,” a place of commerce protected under a centuries-old treaty.

The band eventually challenged the province’s 2016 decision to grant industrial approval to Alton, arguing that the Mi’kmaq hadn’t been adequately consulted on matters that could affect their treaty rights. In March 2020, a Nova Scotia judge ruled in favour of the First Nation.

The site will be decommissioned, but the truckhouse will stay: it’s now a sacred place of education, healing and meeting, and a reminder of the grandmothers’ fight.

Back at the river park, the shadows of the pines grew tall and the last bites of cake were eaten. Maloney returned with a dozen other grandmothers and supporters to her rec room, where it all started. They filled their mugs with black tea, built a bonfire outside and kept the party going.

This article appears in print in the February 2022 issue of Maclean’s magazine with the headline, “Brain over brine.” Subscribe to the monthly print magazine here.