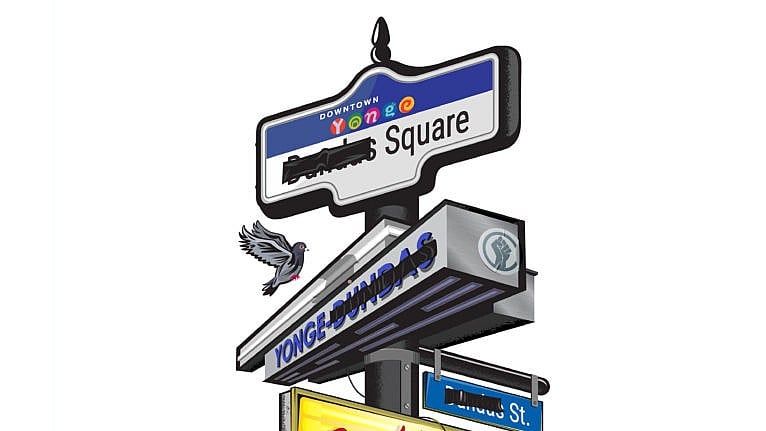 Toronto’s iconic Dundas Street is about to get a new, more inclusive identity. But renaming a major thoroughfare that runs through the heart of Canada’s largest city is no small undertaking.

There are more than 730 street signs bearing the name of Dundas along the route’s 23 kilometres through Toronto. In July, city council voted to replace them all when it decided to change the street’s moniker, whose namesake, the 18th-century British politician Henry Dundas, notoriously delayed the abolition of the transatlantic slave trade by 15 years, dooming more than 600,000 people to another decade and a half of enslavement.

There is broad support for the move; proponents say a modern metropolis should not be honouring racist, colonial figures. It’s been less a controversy than a sort of city-wide history lesson.

What, then, does it take to change the name of an extensive arterial road in North America’s fourth-largest city? In dollar figures, up to $6.3 million. The greatest cost will likely fall upon Toronto’s transit system, which has two subway stations and a streetcar route that use the name, as well as dozens of transit maps posted throughout the system; changing it all will cost an estimated $1.6 million. The material and labour to create new street signs and fixes to the Toronto 360 project—pedestrian wayfinding stations sprinkled throughout the downtown core—could rack up between $1.3 and $2.2 million. Dundas intersects with highways, so massive overhead signs will make up a big part of that price tag. Changes to bike-share stations and public parking signage will cost another half a million. The rebranding of Yonge-Dundas Square, Toronto’s wannabe Times Square, will require $300,000.

It is, notes city manager Chris Murray, “the first major road renaming that Toronto has ever undertaken,” so the city is moving with care: “It’s not like a kilometre of asphalt that you might resurface.” Now that Toronto city council has voted in favour of the change, there will be consultation with an advisory committee made of Black and Indigenous leaders to choose a new name. Residents will see signs replaced in 2023.

For Toronto-based urban planner Keisha St. Louis-McBurnie, changing the name of a street that honours someone who worked to delay abolition is an important act. “We’re at a place where what we name things after is deeply intertwined with the futures we want to give our children,” says St. Louis-McBurnie, who belongs to a task force of the Ontario Professional Planners Institute that addresses anti-Black racism in planning. The project requires people to “on a daily basis educate themselves,” so focusing on the cost is losing the big picture, she adds. “These are budgets that are balanced decade after decade. This is an investment we’re making in the city.” Murray echoes the sentiment: “This is a concerted effort by a modern city to understand its past, but equally important to understand its future.”

READ: A statue of John A. Macdonald rests in purgatory

Still, the changes could have significant costs for people like Antonio Carroca, owner of Dundas Print, one of around 60 companies with “Dundas” in their names. His six-year-old custom print shop—which has struggled as the pandemic drags on—must undergo an expensive rebrand. He faces more than a mere signage adjustment. “I want to do the right thing,” says Carroca. But he relies on Google searches for many of his customers, so changing his company’s name could mean months in web-search limbo, and lost sales.

While it won’t all be smooth sailing, St. Louis-McBurnie believes the task of renaming will be relatively easy. More difficult, she says, is getting “the city of Toronto to address zoning and land-use policies, which continue anti-Black racism.” For decades, she says, the city has favoured construction of single-family homes over multi-family affordable housing, which benefit affluent and mostly white residents.

Still, the project has opened the door to renaming other streets and neighbourhoods with dubious namesakes, which could have a significant combined symbolic effect. Change will not come, though, without more years of debate about history and expenses. The dropping of Dundas may be one step toward creating a more equitable home for Toronto’s 2.7 million residents, but there is still a long road ahead.

This article appears in print in the October 2021 issue of Maclean’s magazine with the headline, “Revitalizing the road.” Subscribe to the monthly print magazine here.