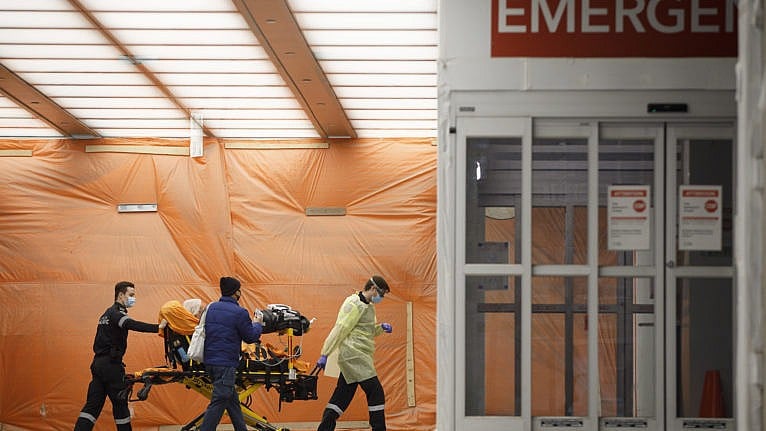 There are reports that triage planning is being discussed in Alberta. Here’s what the Canadian Critical Care Society has proposed be the fundamental principles of triage protocol. This story was originally published January 18, 2021.

The pandemic caused by the novel coronavirus (SARS-CoV-19) continues to pose serious challenges to health-care systems across Canada. While a limited number of regions were more profoundly affected by the first wave, notably in the provinces of Québec and Ontario, there has been a resurgence of cases in recent weeks across the country.

READ: ‘In a way, we triage people all the time’: The reality of COVID inside an ICU

Intensive care beds, and therapies that can only be provided in an intensive care unit, are finite resources. Hospitals have the means of increasing their physical capacity to provide intensive care, and we have secured additional ventilators to support patients who need them. But the health-care professionals required to care for these patients are also a highly skilled and limited resource that may be compromised during a pandemic due to illness, need for self-isolation or quarantine, fatigue, and burnout as the pandemic evolves.

Most hospitals and health-care systems have undergone a process of surge capacity planning, either in the context of previous crises such as SARS and Ebola, or in real-time as the current pandemic has unfolded. Surge capacity planning involves repurposing resources for critical care (e.g. using Operating Room recovery room beds for ICU patients), scaling down other hospital activities to enable increased access for COVID-19 positive patients, and resource- and patient- redistribution, to other hospitals as required. These plans have been deployed to varying degrees at many centres over the past year, and are currently underway in many jurisdictions.

Ultimately, the surge in COVID-19 cases and the demand for finite resources may exceed what is available, regardless of the innovative solutions and strategies used to increase capacity. At that point, not every critically ill person can be offered critical care, and difficult choices must be made. There are essentially three options.

First, we can take a more passive approach and offer admission on a first-come, first-served basis. This is problematic because patients with a poor chance of survival may receive critical care because they presented earlier, while others with a very good chance of survival may be denied access simply because they presented later; many preventable deaths would occur. It is also problematic because it disadvantages those with reduced access to health care, who may present later in their illness trajectory, and those who cannot advocate for themselves.

A second option would be to randomly allocate intensive care beds using a lottery system. This would not give a particular advantage or disadvantage to any group, but it could still lead to a large number of preventable deaths.

READ: ICUs in Alberta are drowning, say doctors. ‘I’ve never had this happen in all my years of practice.’

Finally, we can use a triage protocol that allocates resources based on explicit and previously-established rules. This approach can reduce the number of preventable deaths, while trying to limit the potential for implicit biases to disadvantage specific groups.

The Canadian Critical Care Society (CCCS) believes that triage protocols are a necessary companion to surge planning. Triage protocols have been used in other situations, such as mass casualty events, in the hope of saving the most lives and minimizing the potential unfairness that can be caused by subjective judgment or biases. Although triage protocols involve difficult decisions about restricting access to critical care, these difficult decisions arise regardless of the approach we use. Choosing not to prepare, or choosing a more passive option such as first-come, first-served, is effectively choosing to increase the number of deaths that will occur, and increase the potential for inequities in health care. It also imposes a heavy moral burden on health-care providers and administrators who would ultimately have to decide who would receive potentially life-saving critical care.

This pandemic has already revealed the harms of poor planning in our long-term care sector. We are morally responsible for the consequences of our actions, but also our inaction.

Triage plans should never be considered “final”. The triage protocols proposed for the H1N1 pandemic more than a decade ago have evolved as we developed new tools that help us identify those who are likely to benefit from critical care, and those who are likely to die despite receiving critical care. In all likelihood, the triage plans we will propose for the next pandemic will look different from the ones we are proposing now. Triage plans should also never be considered “good” or “bad”—there is no one correct way to balance the core principles (e.g. saving lives, non-discrimination) that potentially come into conflict when our resources are overwhelmed.

Over recent months, several criticisms have been raised regarding individual components of triage protocols in Canadian and other jurisdictions. For example, people have expressed concern that a frailty-specific mortality prediction tool (the Clinical Frailty Scale) could be misapplied to people with chronic stable disabilities who do not have a high risk of mortality. But removing this tool and asking clinicians to only use subjective judgment would likely increase the chances of a misjudgment. The best way to guard against implicit biases and subjectivity is to use explicit and objective guidance.

The CCCS supports the use of triage protocols that observe the following fundamental principles:

1. Triage protocols should be considered a worst case scenario, to be used only after all reasonable efforts have been made to expand capacity, and redistribute patients and resources. The decision to initiate triage should never be taken lightly, and only in coordination with an authority that has broad situational awareness .

2. The overarching goal of any triage protocol is to prioritize critical care for those who are the most likely to benefit from it based on objective criteria (to the degree possible).

3. Protocols should not prioritize patients based on demographic considerations such as gender, race or socio-economic status, or on the anticipated need for support in future. Factors such as age or disability (either physical or cognitive) should also not be used to prioritize individuals, except where these factors are part of a holistic assessment of the risk of death. For example, functional impairment is a reliable indicator of prognosis in a variety of medical conditions, including cancer, heart disease, and frailty; it does not indicate prognosis in non-frail individuals, such as those with chronic stable disabilities or learning disabilities.

4. Protocols should restrict access only in proportion to the surge in demand, and no conditions should be categorically excluded from critical care. Many triage protocols use a tiered approach which becomes increasingly restrictive as needed, operating interactively and interdependently with efforts across a health-care region to optimize resource use. As long as sufficient resources are available, everyone should be offered critical care if appropriate.

5. Protocols should be drafted before they become urgently required, in order to allow sufficient consultation and reflection from stakeholders. Individuals drafting the protocols should include clinicians in critical care but also other medical specialties such as Internal Medicine and Geriatrics, experts in ethics, law and palliative care, and patients/members of the public representing groups at risk of being disproportionately affected by the triage process. The drafting group should commit to a collaborative, non-adversarial approach.

6. The protocol should describe the process of adjudication and decision-making, and consider having provisions for a triage decision to be appealed. From a practical standpoint, triage decisions are time-sensitive and can take place in remote areas and at any time of day or night. For an appeal process to be impactful, it would need to be able to render decisions within an hour. Appeals processes that cannot provide timely responses should not be used. Existing appeals mechanisms (e.g. courts, or parajudicial bodies) are not appropriate for this purpose. Since many people would be likely to appeal a triage decision, lengthy appeals processes would undermine the triage protocol. Moreover, they would disadvantage those without family members or who are less able to advocate for themselves.

7. Ideally, the CCCS believes that there should be one harmonized triage protocol for all Canadian jurisdictions, to avoid the challenging situation of one patient being refused access to ICU in one province or jurisdiction and offered ICU care in another. We may be expected to share patients and resources, so we should share a common approach. As well, it would re-affirm that Canadians share a common set of values. However, we recognize that legal considerations in various provinces may impact upon the wording and application of certain components of the protocols. To this end, the CCCS encourages open dialogue and sharing of information regarding triage protocols between jurisdictions.

8. Triage protocols should be made accessible to health-care professionals and the public (ideally with a guide to help the general public understand and interpret the protocol).

9. Triage protocols should be reviewed periodically. There should also be a pre-established process to review individual cases or contexts where a triage protocol was applied.

Priority-setting exercises are never easy, and we should not be surprised when some Canadians react negatively to the thought of being denied access to critical care. But in the context of a pandemic, we cannot assume that health care can go on as it does in normal times. Even efforts to increase critical care capacity by cancelling cancer surgeries, transplants and cardiac procedures are themselves a form of triage—we are prioritizing COVID-19 care with the understanding that mortality will increase among people with non-COVID illness. Most importantly, we must remember that we are trying to tackle one of the most challenging ethical problems imaginable, with no historical precedent, in real time. There are no easy answers.