Following DirectTV’s pledge and execution on dropping the state-funded “news” station earlier this week, Russia Today (RT) told staff that they would experience a “permanent” “layoff” as the network “ceasing production” in a couple of months. That, according to CNN media reporter Oliver Darcy, who obtained an internal memo announcing the move to staff.

In the memo, T&R Productions general manager Misha Solodovnikov informed their American-side propagandists they would be “ceasing production … as a result of unforeseen business interruption events.”

“Laid off employees will not have bumping rights, that is, the ability to use your seniority with T&R to remain employed by displacing another employee from his or her job,” the memo added.

Here is the full memo from T&R Productions, the production company behind RT America. pic.twitter.com/TcnpxhfyHj

Darcy deduced that “[t]he news would mean an effective end to RT America” as DirecTV and Roku have kicked dictator “Vladimir Putin’s main mouthpieces in the US” to the curb.

“RT America employees who worked from the Washington, DC, bureau were told on Wednesday that an all-staff meeting would occur on Thursday afternoon,” Darcy reported, detailing an account of the meeting from an anonymous attendee:

“The meeting was all about two minutes,” the attendee said, explaining that Solodovnikov told the assembled staff RT America would be stopping production and that staff would be provided two months of paid severance.

The attendee, who requested anonymity to discuss the internal deliberations, told CNN that the mood was somber.

Well, that’s what happens when you choose to work for a government-funded propaganda organization that tries to lie and spin war crimes. 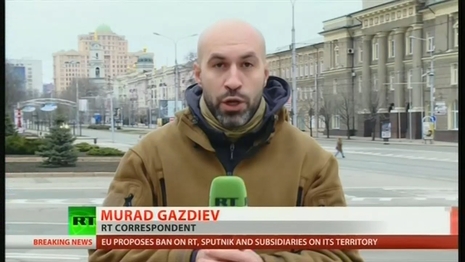 On Monday, RT correspondent Murad Gazdiev asserted, without evidence, that Ukrainian soldiers were surrendering en masse and that citizens that were still fighting the Russian invasion (or “special operation” as the chyron said) were part of the “neo-Nazi battalions, a lie cooked up Putin.

He also claimed Russian forces were “making all efforts to avoid civilian casualties” and put a “ban on bombing or launching rockets and missiles” at civilian infrastructure and residential areas. Meanwhile, we see that they’re increasingly targeting civilian areas in an effort to break the resolve of Ukraine’s defenders.

And they kept the lies coming even as DirecTV pulled the plug.

In their final hours, RT brought on former U.K. MP George Galloway to falsely claim Ukrainian officials “emptied all the prisons” and allowed every “prisoner,” “murderer,” and “rapist” to carry guns. “And some of these groups are killing each other in Kyiv,” he lied.

The layoffs will be going into full effect on May 3, according to the memo.