Ask and you shall receive! Ukrainian President Volodymyr Zelenskyy said his nation is not giving up in its David vs. Goliath mismatch, but its military is badly in need of ammunition. That statement prompted NASCAR racing team owner and former NRA board member Richard Childress to say done deal, ammunition will soon be on the way.

Childress said he was inspired to make a generous stand for freedom by listening to the inspirational words of the Ukrainian leader. The racing legend appeared on Wednesday’s 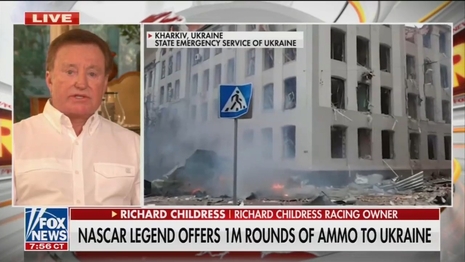 Fox and Friends and said, “I was listening the other day and heard President Zelensky say he didn’t want out, he wanted ammunition.”

That request is right up Childress’s ally, since he is a board member of Ammo, Inc. Furthermore, Childress said:

I called my good friend Fred Wagenhals, who is the chairman of AMMO, Inc., which is a publicly-traded company, POWW, and I said, “Fred, we gotta help these people. They need ammunition.” And he stepped right up, he said, “We’ll do it,”  and now we’re turning our production to this as our number one priority.

It’s a tall order to get the ammunition to a country being besieged by war, but Ammo and Childress are now making plans to deliver one million rounds of bullets to Ukraine. They’re working with government agencies and a private company to expedite the shipment of 7.62s.

The Russian war on Ukraine served as a “wake up call for America,” Childress explained. “To see the people in Ukraine fighting, it’s terrible to see the lives that are being lost over there. We have to do all we can, and I felt with Ammo. Inc. and myself, we were doing the right thing.”

Inducted into racing’s Hall of Fame in 2017, Childress is one of many sports figures and organizations attempting to help Ukraine in its underdog battle against the Russian invasion.

One of Richard Childress Racing’s drivers is Tyler Reddick, who won the first two stages of last week’s NASCAR Cup Series race while his other driver, 2018 Daytona 500 winner Austin Dillon, is his grandson. This team has won six Cup Series championships since its 1969 founding, all with the late Dale Earnhardt.

Another NASCAR team owner, Rick Hendrick, is stepping up in a big way, too. He is donating $200,000 to the Samaritan’s Purse disaster relief efforts in Ukraine and another $2,000 for every lap his driver, Kyle Larson, leads during Sunday’s race in Las Vegas. Samaritan’s Purse is headed up by Franklin Graham, son of the late Billy Graham.

Hendrick commented, “Like the rest of the world, our family has watched the worsening crisis in Ukraine with shock and sadness. We’ve been especially struck by the needless suffering inflicted on innocent children.”