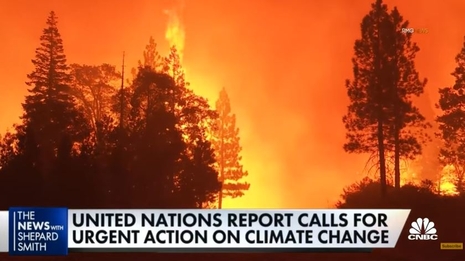 The IPCC has fear-mongered before, making dire predictions that don’t come true, as noted by NewsBusters’ Joe Vazquez. And of course, so has the press. But the Times trio of climate reporters (Brad Plumer, Raymond Zhong, and Lisa Friedman) remained thoroughly credulous:

The dangers of climate change are mounting so rapidly that they could soon overwhelm the ability of both nature and humanity to adapt, creating a harrowing future in which floods, fires and famine displace millions, species disappear and the planet is irreversibly damaged, a major new scientific report has concluded.

In the coming decades, as global temperatures continue to rise, hundreds of millions of people could struggle against floods, deadly heat waves and water scarcity from severe drought, the report said. Mosquitoes carrying diseases like dengue and malaria will spread to new parts of the globe….

To avert the most catastrophic impacts, nations need to quickly and sharply reduce emissions of carbon dioxide, methane and other greenhouse gases that are dangerously heating the planet, the report said.

“This report is terrifying; there is no other way of saying it,” said Simon Stiell, the environment minister of the Caribbean nation of Grenada. “We need to see enhanced action and increased climate finance provision for adaptation. The scale of this crisis requires nothing less.”

If global warming reaches 1.5 degrees Celsius, up to 8 percent of the world’s farmland could become unsuitable for growing food by the end of the century, the authors wrote. Coral reefs, which buffer coastlines against storms, will face more frequent bleaching from ocean heat waves and decline by 70 to 90 percent….

The left-wing neurosis among climate scientists was evident in a follow-up by Zhong in Wednesday’s edition: “The Climate Is Worsening. No One Is Listening. Scientists May Strike.”

Sometimes, Bruce C. Glavovic feels so proud to be an environmental scientist, studying coastal planning and teaching future researchers, that it moves him to tears.

Other times, he wonders whether any of it has been enough. Scientists have proved beyond doubt that climate change is transforming the planet for the worse. Yet their work has mostly failed to spur governments to address the issue. When all the signs are telling scientists that their research is not being heard, it is tragic, Dr. Glavovic said, that they just keep producing more of it.

It was this frustration that led Dr. Glavovic, 61, a professor at Massey University in New Zealand, and two colleagues to send a jolt recently through the normally cautious, rarefied world of environmental research. In an academic journal, they called on climate scientists to stage a mass walkout, to stop their research until nations take action on global warming.

(Lysistrata had nothing on these guys.)

As the oceans rise, forests burn and carbon dioxide levels continue their upward march, even scientists who do not want to go on strike wonder how much longer they can keep serving as soft-spoken brokers of data and evidence.