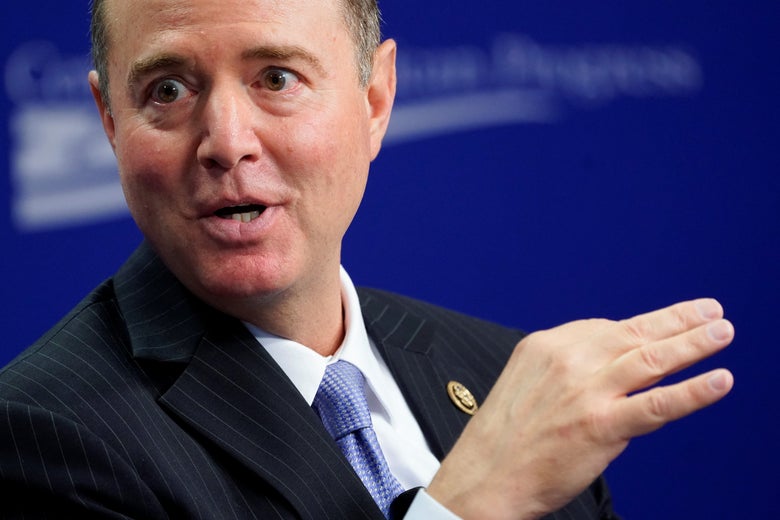 The House Select Committee investigating the events of Jan. 6, 2021 made headlines last week after a resolution from the Republican National Committee formally censured Rep. Liz Cheney and fellow Rep. Adam Kinzinger for serving on a body that was probing what the RNC newly deemed “legitimate political discourse.” One of the surprise aftereffects of the censure was that it exposed a rift between the RNC and Republican leaders, including Sen. Minority Leader Mitch McConnell and former Vice President Mike Pence, who opted to condemn the violence and destruction at the Capitol that day, even as it further antagonized Donald Trump and his staunchest supporters.

In an interview on this week’s Amicus podcast I asked Rep. Adam Schiff, who serves on the Jan. 6 Committee, and was lead impeachment manager for the first Trump impeachment, whether he believes that the GOP’s blind devotion to the “Big Lie” about the “stolen” 2020 election had crossed some invisible line from merely expedient fabrication into something that some members of the GOP understand to be an exigent threat to democracy itself.

Rep. Schiff told me that the GOP’s commitment to the Big Lie was comparable to the party’s messaging around the pandemic and vaccines. “The Republican party, and Donald Trump, created its own monster that not even Donald Trump can control anymore,” he said. And when Trump takes to the stump and says, people should get vaccinated, “he gets booed by his own people; Donald Trump booed by his own base.” In much the same way, Schiff added, “with respect to this big lie, they have pushed this snowball down the hill, and it has gathered so much momentum that it is taking on an irresistible force of its own.”

One of the reasons the Big Lie becomes harder and harder to sustain, Schiff said, is that “on Jan. 6, you had Republican members of Congress challenge the electors from their own states; claim that the ballots, which elected Joe Biden were fraudulent, when they were elected on the same ballot.” As Schiff put it, “I do think that some of these Republicans, like Mitch McConnell, recognize that this monster may consume them too; that if they’re going to go along with the big lie, then that big lie could be used against them in their own election.”
Given the fact that this is a problem for GOP leadership, and not for a base that is wedded to the original Trumpist messaging around both vaccines and stolen elections, I asked Rep. Schiff whether after a Mueller Report and two impeachment efforts, it made any sense to participate in yet another investigation that was neither fish nor fowl – not quite law, not quite politics. The investigation is unlikely to change the minds of many stalwart believers that Joe Biden did not legitimately win the 2020 election. Multiple lawsuits have already proven otherwise. This isn’t a criminal process, and it doesn’t necessarily bring legal consequences, so is it just a first draft of history?

His answer harked back to the first impeachment, when, he said “I would tell my fellow managers that we were speaking to the four and the 40 million — the four Republican senators we thought might have an open mind and the 40 million Americans that we estimated also had an open mind.” Schiff added that while a great many Americans have a very closed mind when it comes to Jan. 6, because the way we get our information is so balkanized:

There still are tens of millions of people who don’t live, eat, and breathe politics. They’re just trying to get by and provide for their family. And they are hearing these conflicting narratives about Jan. 6. They’re hearing it’s legitimate political discourse, but then they’re seeing images on TV of police being beaten and battered. And they’re trying to reconcile, how could they possibly be saying this is legitimate political discourse? And it’s important that we speak to those people. So, I view that as a very important component of the public hearings that we are going to begin, I think in a matter of weeks or months. I view those hearings as speaking to the American people and sharing the facts we’re learning in the investigation. I view the report as a document for history, and I view our responsibility, as the recommendations that come out of that. To try to take steps to prevent anything like this from happening again. And so, I think you’re right, we are kind of at the intersection of history and justice, and I would add accountability. Justice has predominantly been the role of the justice department. But we’re hopeful that our accountability can also lead to justice.

In the years since the 4-and 40 million formula, it’s possible if not likely that there are even more Trump enthusiasts than there were, who are willing to believe whatever he says, no matter what the evidence may reflect. But Rep. Schiff sees something else at play. The four Republican Senators may be 5, or 6, simply because the transactional value of the Big Lie is a growing threat to their own seats, and also to fundamental ideas about the rule of law and a peaceful transfer of power. And we may be creeping up on more than 40 million Americans who have a sense that something truly existential happened on Jan. 6, something that is more tangible than an ambiguous telephone call to Ukraine. If that calculus is correct, this Jan. 6 committee isn’t just drafting an account for the history books, so much as producing a closing argument in the case Adam Schiff opened years ago.