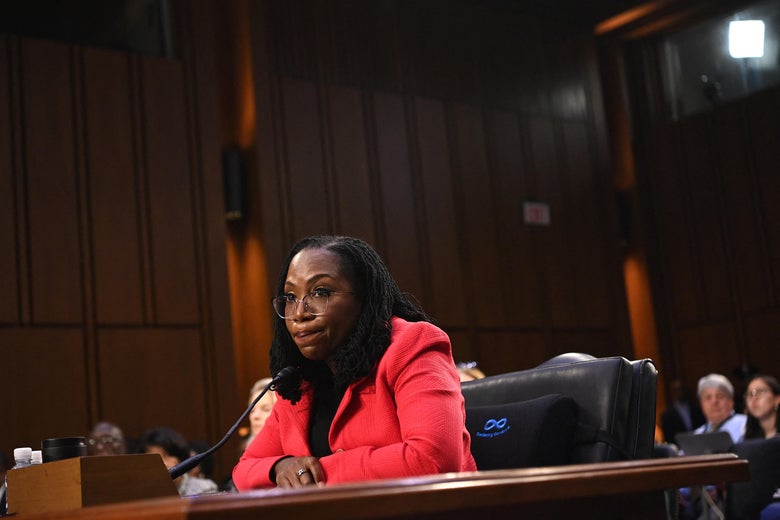 On the second day of her confirmation hearings for a seat on the U.S. Supreme Court Judge Ketanji Brown Jackson revealed her greatest strength and greatest weakness: She is simply not a purely political animal and she never quite learned how to talk like one.

Unlike several  prior Supreme Court nominees, who flew down to Florida to lend a hand in the litigation over the 2000 election,  Jackson wasn’t working for a political candidate prior to being tapped for the role. Unlike other recent nominees, who have served on the Starr Investigation or worked in the Ronald Reagan Administration to constrain minority voting rights, Jackson’s professional career, both in private practice and as a public defender, mainly involved being a lawyer, often on different sides of political issues. And as a federal judge with nine years of experience on the bench, she can tell you, in great detail, how she has applied the law to the facts in any given case, how she reconciled statutes that appeared to conflict, and how the Administrative Procedures Act is applied.

But what she cannot readily do, with the icy calm of a lifelong political operative, is offer up softball political answers to Senators’ pointed political questions. Confronted time and again with tired and outdated questions about whether she is a “judicial activist,” or “living constitutionalist,” she pivots to explain that she doesn’t so much have a judicial philosophy as a judicial “methodology.”  And when she attempts to lay out that three-part methodology, it doesn’t precisely roll off her tongue, in the same manner as cute metaphors about “balls and strikes” or lashing oneself to a ship’s mast.

Asked by Sen. Dick Durbin to lay out her personal judicial philosophy in reference to past or sitting Justices, Jackson on Tuesday again demurred: “I haven’t studied the judicial philosophies of all of the prior justices,” she said. “I will say that I come to this position, to this moment, as a judge who comes from practice, that I was a trial judge and my methodology has developed in that context.” This means that Jackson is at her most compelling when she is explaining how the Sentencing Commission guidelines are applied in a given case, or how she tries to explain the criminal justice system to a defendant for whom the entire machinery is impenetrable and opaque. Where she falters, often almost imperceptibly, is when she is asked about a purely partisan political issue that has absolutely nothing to do with how she has been doing her actual job for nearly a decade.

Take, for example, her exchanges with Sen. Ted Cruz. The enduring mental image I will hold until the day I die will be of two side by side photos: Jackson at a table alone, attempting to explain that Critical Race Theory is a concept taught at law schools, that she neither studies nor relies upon as a jurist, while Cruz tries manfully to get her to endorse a children’s book, Antiracist Baby, taught in a school where serves as a board member. On the one hand a serious judge who has done years of work on actual legal issues in the trenches as a lawyer and jurist. On the other, the guy with an overblown image of anti-racist diaper babies gamboling behind his head. This split screen highlights the experiences of every intelligent woman and person of color who has dedicated a lifetime to painstakingly explaining their right to even be at that table. Despite their efforts, they are all too often waylaid by man-babies peddling and demanding distracting sound bytes about issues that have nothing to do with the job for which they are auditioning.

In her opening statement Jackson suggested to the committee that “you may have read some of my more than 570 written decisions.” But for those Senators who cannot be bothered to engage with her body of published work, there will always be children’s books that need banning.

There is no better proof that Jackson is in fact a judge’s judge, than the ways in which she described —in painstaking detail— how she approached sentencing in sex offender cases. Jackson laid out her methods, multiple times, in response to a widely debunked smear avoided by most of the GOP Senators but seized upon by Sens. Cruz, Josh Hawley and Marsha Blackburn. Jackson was careful to explain the kinds of evidence she must review in those cases, the crime’s impact on victims, and the standards necessary for imposing a statutory sentence. When she described how she did her job, she was spectacular. When distracted by hand waving about politics that bears no relation to her job, she was apt to get rattled.

Late in the day on Tuesday, Jackson avoided saying which Justice she has molded herself after, when invited to do so by Sen. Ben Sasse, by explaining that any theory or philosophy distorts the “input” that she is trying to assess neutrally, changing the outcome. She added that ideas about constitutional interpretation simply don’t come up much on the lower courts. Sasse continued to insist that she was either avoiding the question or hiding the ball. But what she was saying, what she continued to say, was that she has in fact been too damn busy being a judge for the last nine years to luxuriate in the academic debate-slash-roadshow proffered by Justices Antonin Scalia and Stephen Breyer about modes of interpretation. In other words, there is an immense amount of privilege required to even possess a snappy trading card of a lofty “judicial philosophy” that actually has little to do with what a trial court judge does all day. Many of those elevator pitch buzzwords and metaphors are often ideological methodologies that can get in the way of actual neutrality.

It’s quite refreshing to hear a judicial nominee decline the invitation to expound about catchy constitutional philosophy, when that philosophy can get in the way of actually doing law. At the same time, it’s quite depressing to watch that nominee being persistently lectured about her failure to espouse a catchy constitutional philosophy. It suggests, in yet another way, that even a nominee that does precisely what she is tasked with, brilliantly and fairly, isn’t deemed quite qualified unless she does it with all the abundant and ineffable self-confidence and tissue-thin claims to “philosophy” of a mediocre white man.