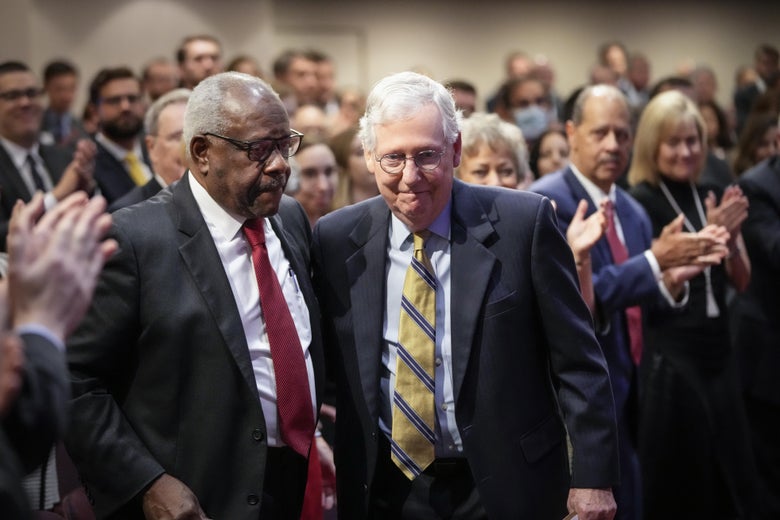 Last week, the Supreme Court handed down two decisions indicating radical new directions for American law. This may be obvious when it comes to Dobbs v. Jackson Women’s Health, which extinguished women’s constitutional rights to choose abortion. After all, in his concurrence Justice Clarence Thomas explicitly called for the reconsideration of all of the Supreme Court’s substantive due process precedents. The other case, New York State Rifle & Pistol Association v. Bruen, is a gun control case in which Thomas wrote for the majority, striking down a state law constraining who could carry guns in public.

The majority opinion does not suggest comprehensive reconsideration of existing Supreme Court case law though it clearly paves the way for judicial decisions invalidating all sorts of statutes regulating access to firearms. Bruen is the harbinger of an even more drastic shift. It signals the current Supreme Court’s receptivity to the idea that the Constitution directly eliminates avenues of civil accountability for gun makers and sellers, even when a maker’s or seller’s conduct plays a close causal role in excessive gun violence. Currently, state and federal statutes are the legal mechanism for insulating gun makers and sellers from civil damage actions. If gun industry actors succeed in convincing the Supreme Court that the Constitution itself gives them immunity from civil liability under state law, these statutes will become superfluous. Even if the statutes were repealed, gun industry immunity from civil lawsuits would survive.

At the federal level, the Protection in Lawful Commerce in Arms Act grants sweeping immunity from civil lawsuits to gun makers and gun sellers when their wares are used in criminal shootings, regardless of the causal part played by the maker and seller of the gun. PLCAA includes some exceptions, and at least one, the “predicate exception,” has gained some measure of traction. This exception allows a victim to bring a civil damages action for injuries involving criminal use of a gun against the gun’s maker or seller if the maker or seller has violated any other statute regulating the manufacture or sale of guns. For example, this exception supplied the basis for the suit brought by the Sandy Hook families against Remington, the manufacturer of the AR-15 used to kill twenty children and six adults at a Connecticut elementary school in 2012. The families ultimately achieved a settlement from Remington by successfully arguing that they could use the company’s violation of Connecticut’s consumer protection laws to ground their case.

New York has recently passed a statute specifically designed to bring certain lawsuits within the same exception. The New York law identifies the making, marketing, or selling guns excessively appealing to criminals as a legal wrong called a public nuisance. If a plaintiff can show that a gun industry defendant engaged in the statutorily designated conduct, the plaintiff’s suit will fall within the predicate exception to PLCAA’s general bar.

As cases brought under the predicate exception to PLCAA proliferate, I expect gun makers and sellers eventually to defend against them by arguing that the Second Amendment itself—separately from the terms of PLCAA—insulates them from civil liability. They will rely on Bruen to do so.

The majority opinion in Bruen insists that “[t]he constitutional right to bear arms in public for self-defense is not ‘a second-class right, subject to an entirely different body of rules than the other Bill of Rights guarantees.’” A primary example of a right the majority says has received appropriate respect is the right to free speech. Throughout the opinion, Thomas says that the Second Amendment must receive the same due as the First. Thomas knows that the First Amendment does not provide unlimited protection to speech, that the state may regulate speech in all sorts of ways. So, he is not referencing First Amendment law to suggest that there are no limits on the right to keep and carry arms.

First Amendment law does, however, insulate the press from some civil accountability. In a line of cases dating back to 1964, the Supreme Court constitutionalized first the law of defamation and later the law of intentional infliction of emotional distress, overturning jury awards of damages to plaintiffs because, according to the court, the awards rested on liability rules that fell afoul of the First Amendment.

The basic idea in support of this reasoning is that the First Amendment is meant to yield a marketplace of ideas, in which there is a free flow of thoughts and opinions on matters of public interest. To adequately promote this metaphorical market, the First Amendment protects some tortious speech, such as speech that would traditionally be deemed libelous or intentionally injurious to emotional well-being. In place of the usual liability rules for these torts, the Supreme Court crafted a different standard, requiring public figures seeking damages due to speech published in newspapers and magazines to prove that the media defendant actually knew or recklessly disregarded the falsity of the statements in question. Interestingly, Thomas and Neil Gorsuch have critiqued the court’s adoption of this “actual malice” standard, on the ground that it is neither rooted in nor required by the text or history of the First Amendment. Just on Monday, Thomas reiterated his hostility to the specifics of the actual malice standard as applied to media defendants.

Nevertheless, the constitutionalization of libel law supplies a model for gun makers and sellers to use to get courts to give them constitutional protection from civil damages actions. Rather than appeal to a metaphorical marketplace of ideas, the gun makers and sellers will point to the actual market for firearms. They will say that just as tortious speech must be given breathing room so as to ensure the free flow of opinions and ideas so too must the manufacture and sale of guns especially appealing to criminals be tolerated so as to ensure a steady supply of arms to those who want them for self-defense. Whether grounded in negligence law, the law of public nuisance, consumer protection law, or any other liability regime, suits brought by victims of gun violence will tend to increase the costs of guns or limit the variety of guns available in the marketplace or both. Thus, the argument concludes, by the same logic that shields the press from civil liability per the First Amendment, gun makers and seller must be shielded from civil liability per the Second Amendment so as not to cramp the exercise of the right to keep and bear arms.

I’ll name only a few of the many weaknesses in this argument. Unlike press speakers, gun makers and sellers are not themselves exercising the underlying right recognized in the Bill of Rights. Gun industry actors are commercial entities seeking to profit from consumer demand for guns. This makes the manufacture and sale of guns more like the sale of commercial advertising. Commercial speech is ineligible for the same protection accorded to non-commercial speech on matters of public interest. More specifically, the Supreme Court has permitted traditional tort recovery when a magazine published an advertisement that led directly to a criminal killing. When the magazine directly facilitated murder, it could be held liable for wrongful death just like any other tortfeasor. This, not a comparison to press speech, is the analogue to gun makers and sellers producing, promoting, and selling weapons with the sort of easy or high-volume human lethality attractive to criminals.

I could go on but, as last week’s Supreme Court decisions show, pinpointing flaws in legal arguments is not enough to stop the current extremists on the Supreme Court from reaching unprecedented legal conclusions or overturning established precedents. It makes more sense to take seriously the Bruen majority’s rhetoric insisting that that it is merely treating Second Amendment rights with the same judicial regard given First Amendment ones and to gird ourselves for defense arguments claiming that gun industry actors must be protected from civil liability so as not to chill gun possession and carry. We cannot rely on the justices in the Bruen majority to reject such arguments. If we are ever to secure the right of shooting victims to seek civil justice from gun manufacturers and sellers, we must work to change who controls the Supreme Court.