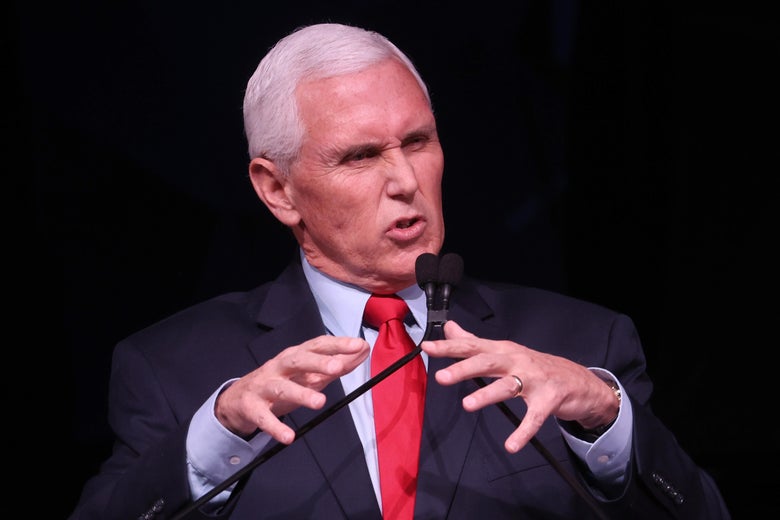 Former Vice President Mike Pence told a group of Republican donors on Friday night that there’s “no room in this party for apologists for Putin.” The words marked another example of how Pence is trying to distance himself from his former boss, Donald Trump. “To those who argue that NATO expansion is somehow responsible for the Russian invasion of Ukraine: Ask yourself, where would our friends in Eastern Europe be today if they were not in NATO?” Pence told Republican donors in New Orleans. “Where would Russian tanks be today if NATO had not expanded the borders of freedom? There is no room in this party for apologists for Putin. There is only room for champions of freedom.”

Pence didn’t actually name Trump, but there was little mystery who he was referring to considering his words came shortly after the former president praised Russian President Vladimir Putin as a “genius” and “peacekeeper.” Trump later seemed to change his mind a bit and called the Russian invasion “a holocaust” and called on Russia to “stop killing these people” during an interview with Fox Business host Maria Bartiromo. Despite the shift, Trump also seemed to take pains not to directly condemn Putin.

Pence’s words marked the second time over the past month that the former vice president rebuked Trump. In early February, Pence said Trump was “wrong” to say the former vice president had the legal authority to change the outcome of the 2020 presidential election. “I had no right to overturn the election,” Pence said in a speech before the Federalist Society in Florida. Trump quickly criticized Pence for his remarks, calling him  “an automatic conveyor belt for the Old Crow Mitch McConnell to get Biden elected President.”

On Friday, Pence once again continued to contradict Trump’s false claims about the 2020 election and said Republicans had to look forward if they had any hope of winning elections. “Elections are about the future,” Pence said. “My fellow Republicans, we can only win if we are united around an optimistic vision for the future based on our highest values. We cannot win by fighting yesterday’s battles, or by relitigating the past.” It’s clear though that Pence doesn’t disagree with Trump on everything and echoed the former president’s claim that Putin wouldn’t have invaded Ukraine under the previous administration. “It’s no coincidence that Russia waited until 2022 to invade Ukraine,” Pence said. “Weakness arouses evil, and the magnitude of evil sweeping across Ukraine speaks volumes about this president.”