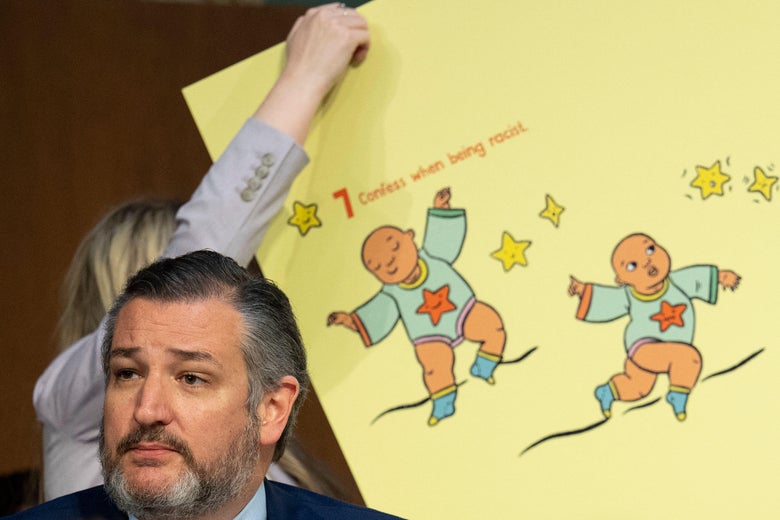 Judge Ketanji Brown Jackson faced hours of questioning from the Senate Judiciary Committee on Tuesday, the second day of her confirmation hearings to replace the retiring Justice Stephen Breyer on the Supreme Court. On Monday, Jackson was promised a “respectful” and “dignified” hearing from Senate Republicans. Some of the GOP’s questioners lived up to that standard, but there were three notable exceptions: Sens. Ted Cruz, Tom Cotton, and Josh Hawley.

It’s relevant that these are the three most high-profile Republicans on the committee with future presidential aspirations. Cruz, Cotton, and Hawley spent their rounds of questioning by theatrically fearmongering around pet issues that animate the conservative base. One line of attack—the QAnon-whistling suggestion that Jackson is soft on child predators—has previously been refuted by the conservative National Review as a “smear” that is “meritless to the point of demagoguery.” Cruz also spent significant time on Critical Race Theory, distorting aspects of the judge’s record in a way that turned the hearing into a culture-war spectacle.

Cruz brought up Jackson’s position on the board of the private Georgetown Day School, where  books like Ibram X. Kendi’s Stamped (For Kids) and Antiracist Baby are taught, to ask Jackson whether she agreed that “babies are racist.” Behind Cruz were propped blown-up images of the picture book Antiracist Baby, replete with cartoon drawings of children in diapers.

“Do you agree with this book that is being taught with kids that babies are racist?”

Ted Cruz repeatedly pressed Ketanji Brown Jackson over her position on the board of trustees at Georgetown Day School, a private school in D.C., and what role CRT has in the school’s curriculum. pic.twitter.com/VM8cfWmYoa

In line with her deft responses throughout the day, Jackson noted that when she listed “social justice” as part of the school’s mission—which Cruz attacked her for—it was a nod to the school’s profound civil rights legacy. From Judge Jackson’s testimony:

The school was founded in 1945 in Washington D.C. at a time in which, by law, there was racial segregation in this community. Black students were not allowed in the public schools to go to school with white students. Georgetown Day School is a private school that was created when three white families, Jewish families, got together with three Black families, and said that despite the fact that the law requires us to separate, despite the fact that the law is set up to make sure that Black children are not treated the same as everyone else, we are going to form a private school so that our children can go to school together. The idea of equality, justice is at the core of the Georgetown Day School mission.

Cruz, a former Harvard Law School classmate of Jackson, wasn’t done with the topic, however. In referring to another Kendi children’s book, Stamped (For Kids), he said:

I will say it is an astonishing book. On page 33, it asks the question ‘can we send White people back to Europe?’ That’s on 33, that’s what’s being given to 8-and-9-year-olds. … Are you comfortable with these ideas being taught to children as young as … 8 and 9?

Cruz’s description of Kendi’s book was inaccurate. The passage in question was not to suggest that white people be sent back to Europe, but to illustrate a point about Black and Brown people being told to “go back to where you came from.” From the book:

When Thomas Jefferson became president in 1801, there was lots of talk and debate over what to do about the issue of slavery. One idea tossed around by White assimilationists was for Black people to “go back” to Africa and the Caribbean. But Black people didn’t want to “go back” to a place that many had never known. …

Do you see how racist ideas of today are tied to racist ideas of the past? The phrase ‘Go back to where you came from’ that is sometimes said to Black and Brown people today connects to the ‘go back’ ideas of the past. Now you can trace the origins right back to Thomas Jefferson. (By the way, just imagine what Native Americans and Black people must have wished about their White oppressors: Can we send White people ‘back’ to Europe?)

The CRT line of questioning was, though, a table setter for Cruz’s suggestion that Jackson is soft on those convicted of possessing child pornography. The basis of this attack was a series of cases Republicans have alleged were part of a pattern by Jackson of undersentencing sex offenders with child pornography collections. “Do you believe the voice of the children is heard when 100 percent of the time you’re sentencing those in possession of child pornography to far below what the prosecutor’s asking for?” Cruz posed to Jackson. The judge explained that she was following the law and standard practice in these disturbing cases. “The evidence in these cases are among the worst that I have seen, and yet, as Congress directs, judges don’t just calculate the guidelines and stop,” she noted. “Judges have to take into account the personal circumstances of the defendant, because that’s a requirement of Congress.”

Again, this line of attack—later echoed by Hawley and Cotton—was misleading. A conservative former prosecutor, Andrew C. McCarthy, wrote in the National Review that he would oppose Jackson on many grounds, “[b]ut the implication that she has a soft spot for ‘sex offenders’ who ‘prey on children’ because she argued against a severe mandatory-minimum prison sentence for the receipt and distribution of pornographic images is a smear.” As McCarthy noted, those mandatory minimums have not been updated in more than a decade, and even the most hardened prosecutors often argue for leniency for younger perpetrators, as did Jackson, because of the nature of the crime and the distorted nature of the current guidelines. As the Washington Post’s Fact Checker noted, it is a widespread view in the judiciary that these sentencing guidelines are too harsh and judges often depart from them. As the Post reported, “A 2010 survey showed 71 percent of judges said the mandatory minimums for receipt of images were too high.” Further, a 2021 report by the U.S. Sentencing Commission found that judges gave these non-production child-porn offenders sentences below the guideline range 70 percent of the time.

Perhaps Tuesday’s performances will win Hawley, Cotton, and Cruz voters in a future Republican presidential primary, but they are unlikely to dent Jackson’s prospects of elevation to the high court. And their questioning has shown that matters of the court are hardly the first things on their minds.