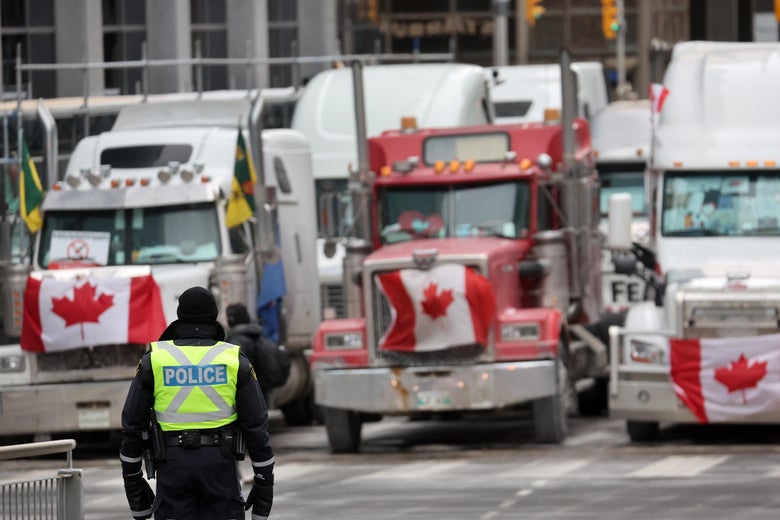 Since the big rigs rolled into Ottawa in late January, the Canadian truckers’ occupation has captured the world’s attention. And how could it not?

Entering the “red zone,” as the convoy-controlled territory is known, is otherworldly. Over the last few weeks, the occupiers have hauled in lumber, built a kitchen, set up a hot tub, inflated bouncy castles, erected jumbotrons, launched aerial fireworks, perfected their pulled pork (I hear it’s excellent), and turned key intersections into the hottest nightclubs in town.

The convoy also acts in many ways like a militia. Flag-draped pickups rove around town. Scouts do aggressive surveillance work and intimidate residents. Signs and banners demarcate the occupied territory. Some 400 hate incidents have been reported, and among the Canadian flags on hockey sticks, there’s Nazi imagery and a kaleidoscope of flags associated with extremist movements – including, at times, Confederate flags.

The vibe is half block party, half gang-controlled turf.

And as police mobilized near Ottawa’s city center on Thursday, the convoy dug in and held their ground. The participants have many grievances, but are united by their dislike of government mandates – especially related to COVID-19 – and their rank hatred of Justin Trudeau. The organizers are drawn from a shady constellation of far-right, populist, and extremist groups, with a few ex-law enforcement types thrown in for good measure. Some aim to overthrow the government, perhaps by forming a ruling junta with opposition political parties and the Governor General of Canada.

So what should we make of this rave-cum-revolution?

Most media coverage frames it as a protest – and to be sure, there are aspects of a protest: crowds of people on foot, carrying signs, making noise and trying to make their voices heard.

But seeing the convoy as just a protest is how we got into this mess. In late January, law enforcement watched as the convoy traveled across Canada, its unconstitutional aspirations and dreams of occupation on full display. Yet instead of reaching for their “attempted insurrection” playbook, the Ottawa police grabbed their “typical protest” standard operating procedure. A few strategically placed concrete barriers could’ve changed the course of history, but local officials lacked the imagination to grasp the meaning of the intelligence that was in plain view.

And so an armed group seized control of the center of a G7 capital.

Soon, tractor-trailers crammed the streets, diesel fumes choked the air, horns blared 24-7, and intimidating hate speech became the new normal. Meanwhile, the Ottawa police congratulated themselves on preventing large-scale riots, injuries, and loss of life. They even declared that they’d stopped another Jan. 6 from happening in Canada (though I’d say the jury’s still out on that one).

The truth is, this group was armed and dangerous from the start. Big rigs are not just trucks. They’re also rolling fortresses, heaters, hotels, noise machines, and potentially lethal weapons. From day 1, the sheer heft of the trucks has loomed over every interaction with the convoy, the implicit threat of violence hanging thickly in the air.

At least one firearm has been intercepted en route to Ottawa, to say nothing of the long guns, ammunition, and body armor recently seized near a related blockade in Alberta. Given the lax-to-nonexistent policing in Ottawa, it’s impossible to know what else could be squirrelled away in the convoy’s warren of vehicles, tents, and bases. When a journalist asked during a press conference if there were firearms in the trucks, convoy organizers refused to answer.

For weeks, the police have claimed they could not make arrests, tow vehicles, or issue tickets due to concerns for their own safety. They’ve been badly outnumbered, and attempts to enforce the law have resulted in mobbing of officers and a “near-riot.” As the (now former) chief explained, the police are “at great risk in every single encounter.”

Fair enough, but then how are ordinary residents supposed to feel?

Some Ottawans describe this as a hostage situation, with heavy elements of extortion. And the convoy is intentionally harming local residents, in an effort to extract concessions from the government – a tactic that, unfortunately, has proved partially successful.

Other residents are simply terrified. Blind people cannot safely leave their homes, due to deafening noise. Anyone with PTSD or sensory processing issues is in constant distress. Far from being a “nuisance,” as the New York Times editorial board described it, the convoy has harassed schoolchildren, spawned coordinated attacks on the 9-1-1 system, forced the closure of lifelines like grocery stores and medical offices, and deprived thousands of people of their freedom, sleep, and sanity. As city councilor Catherine McKenney has repeatedly screamed: “PEOPLE LIVE HERE.”

Democracy is not just about elections and free speech; states also have an obligation to uphold the rule of law and protect their residents’ rights. And right now, Canada is failing that test.

But again and again, the government has given the convoy the gift of time. Time to perform.  Time to fundraise. Time to recruit. Time to build relationships. Time to professionalize their operation.

Then, they established “forward operating bases” on the outskirts of town, in addition to a central logistics hub – complete with saunas. (This is separate from their indoor conference spaces, where they host surprisingly well-produced press conferences.)

Now, the convoy is experimenting with governance. They pick up trash. They shovel snow. They direct traffic. They’ve sworn in their own cohort of “peace officers,” and some convoy members have tried to arrest Ottawa police.

As the rule of law retreats into the distance, what’s the takeaway? Both the right and the left seem weirdly tempted to objectify Ottawa, slotting the city’s plight into pre-existing debates about big tech, freedom of speech, and the perverse consequences of social capital.

I tend to think the bigger story lies in the lived experiences of the people of Ottawa. My neighbors are so desperate, they’re putting their bodies on the line to challenge the convoy.  We are living under not one, not two, but three states of emergency. The beleaguered police chief has resigned. And after nearly three weeks of occupation, additional law enforcement personnel are finally pouring into the city.

Yet down in the red zone, the BBQs are smoking, the music is pumping, and the convoy rolls on, for now.

Full-fledged rebellions in advanced industrialized democracies are rare. Either would-be rebels are deterred by the power of the state, or governments react swiftly. But just because a state has the capacity to resist an insurrection, that doesn’t guarantee that it will. Democracy and security are intricately linked and more tenuous than we might like to think – even in Canada.