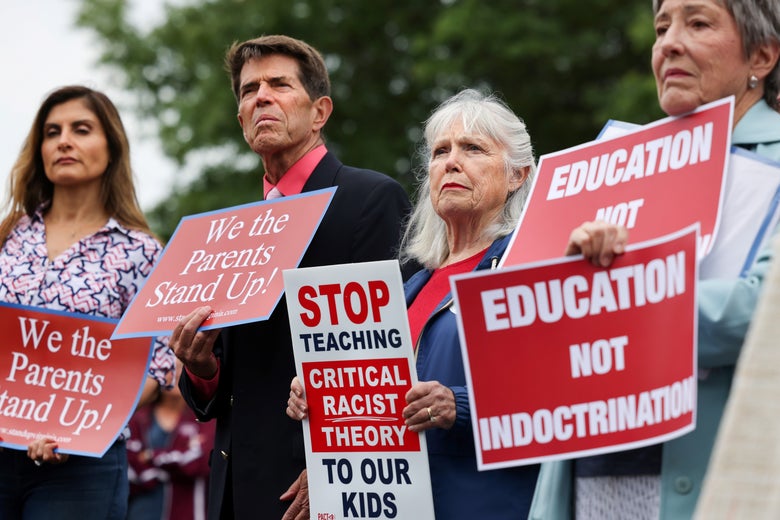 In the space of a few short months, we’ve gone from a panic about teachers communicating critical race theory in K–12 schools (without even fully identifying what that idea means or whether it’s actually being taught in schools), to a proposal for a full-on surveillance regime to monitor such teachers, to a slate of new laws about punishing and even recovering money damages from them. If you blinked, you missed it. A year ago, we were fighting about how race, gender, and history were discussed in the classroom. Today, in states across the country, teachers are being threatened with tip lines, video cameras, and personal monetary liability and damages. From bitching to snitching in under a year.

Welcome, then, to the new normal: close parental supervision of educators to ensure loyalty and obedience. A New Hampshire bill was introduced this winter to regulate, by its own title, “teacher loyalty.” The text of the bill provides that “no teacher shall advocate any doctrine or theory promoting a negative account or representation of the founding and history of the United States of America in New Hampshire public schools which does not include the worldwide context of now outdated and discouraged practices.” It continues: “Such prohibition includes but is not limited to teaching that the United States was founded on racism.” Texas state Rep. Matt Krause famously produced a list in October of the 850 books he said “might make students feel discomfort, guilt, anguish, or any other form of psychological distress because of their race or sex.”  Florida Gov. Ron DeSantis has signaled support for a bill advancing in the Florida Legislature that would restrict classroom discussion of sexual orientation and gender identity that is not “age-appropriate” or “developmentally appropriate.” The bill defines neither of those two terms.

A daily email update of the stories you need to read right now.

Thanks for signing up! You can manage your newsletter subscriptions at any time.

All this in addition to books being pulled out of school curricula.

And apart, again, from the book burning.

A Texas-style “bounty” bill recently proposed in Oklahoma would allow parents to directly sue teachers whenever a public school “promotes positions in opposition to closely held religious beliefs of the student.” A PEN America report documents how many new proposals would give parents such a right of action. In Iowa, a newly proposed bill would allow parents to watch live footage of their children in public school classrooms. Its proponent, Republican state Rep. Norlin Mommsen, justified the Orwellian surveillance with the argument that “similar to a body camera on a policeman, a camera takes away the ‘he said, she said’ or ‘he said, he said,’ type argument and lets them know ‘hey, we are doing a good job.’ It takes that argument away.” An Indiana bill now being debated in the state Senate prevents teaching “that any individual should feel discomfort, guilt, anguish or any other form of psychological distress on account of the individual’s sex, race, ethnicity, religion, color, national origin or political affiliation.” Schools must allow parents to enroll their kids in “alternative education” if they feel content in the classroom is inappropriate.

The Washington Post’s Greg Sargent tracked this subtle move from bans on subject matter to snitch lines and the possible recovery of money damages. A new GOP proposal in West Virginia would establish a tip line to report teachers caught teaching “critical race theory”; it’s of course modeled on Virginia Gov. Glenn Youngkin’s tip line so that parents can report any teachers or school administrators who might be teaching “divisive” subjects like “critical race theory.” The tip lines are part of a long history, Sargent notes. Calls “for maximal parental choice and control in schools have been used by the right for decades as a smoke screen to sow fears and doubts about public education at its ideological foundations.”

All of this has less to do, as my colleague Lili Loofbourow pointed out, with “book bans” per se, or even the moral panic over the teaching of “critical race theory” (which is a term that means precisely whatever one wants it to mean at this juncture). It has more to do with the creeping encroachment of surveillance and snitching, and the attendant self-help that follows as solutions to perceived government failings. And of course, it also has everything to do with the GOP’s interest in slowly strangling public education. Having hounded good people out of local public health and local elections jobs, it’s now time to terrorize the teachers, principals, and school officials into living in constant fear of reprisal, including personal liability and sanctions. Most of these bills are so poorly crafted that an educator won’t know she’s run afoul of them until a parent complains. And no teacher can possibly know what subjectively causes any one student or parent to feel “uncomfortable.” Best to just let the kids color.

Teachers are already on the ropes for so many reasons. Now terror, second-guessing, and personal financial liability have been added to their pile. As NBC News reported, these threats are pushing some educators to leave the profession. One Texas school librarian who’s retiring early said, “I got out because I was afraid to stand up to the attacks. I didn’t want to get caught in somebody’s snare. Who wants to be called a pornographer? Who wants to be accused of being a pedophile or reported to the police for putting a book in a kid’s hand?” People who enter fields like health care and education did so because fundamentally they wanted to help people, for pay that is not commensurate with their efforts. To be told that your workplace is a war zone and that you are hostage to potential “discomfort” on every side is not simply to be devalued, but also to become instrumental.

There’s one other element at work that must be factored in. As Margaret Renkl argues, the real goal in Tennessee wasn’t just to ban a book here or there, or to traumatize teachers into mass exodus. The real goal is a state-sanctioned push for privatized sectarian education. In this program, the current Supreme Court is also a primary driver. The effort to erode the line of funding between secular and religious schools will be one of the first triumphs of the 6–3 supermajority this term.

It is surely the case that the months of lockdown brought home to parents the nuts and bolts of school instruction and curricula in ways that were once merely hypothetical. I know far more about what my sons read for school, what was discussed in class, and how it affected them now than I did in the years before COVID, where if it wasn’t a problem, I didn’t hear much about it. As Jessica Grose smartly observes, “after two years of pandemic uncertainty and chaos, we’re in a moment where some parents want to exert control over something, anything for their kids, and I do have some empathy for that feeling, if not for the expression of it.”

Particularly because the early quarantines, when virtual schooling was happening everywhere, brought curricula and teachers into our homes in much more intimate ways. In that moment, teenagers were at home instead of starting to grow away from their families, which is what they’re supposed to do. While parents always have some sway over their kids, this period of enforced togetherness possibly gave some parents the illusion that they still had full authority over their adolescents’ intellectual lives.

But this phenomenon alone doesn’t explain the current assault on educators. The pandemic affected all parents and their children. Now, a faction has returned to school to demand compliance and reprisals. The problem Grose identifies—that some parents, who by all accounts are overwhelmingly white, have become a bit too enmeshed with their kids’ growth and development, and a bit too horrified at their children’s inevitable encounters with material that includes gay characters, Holocaust victims, and white slaveowners—is only part of the current controversy. It’s not just that these parents increasingly want to paint a world for their kids in which none of those things ever existed; it’s that they want to suggest that all those other ways of looking at the world are other, are dangerous, are insidious or bad. The nuanced retelling of history and the centering of previously marginalized groups in public education are now tagged as subversive efforts to indoctrinate, as opposed to the bargains diverse people make in democratic life.

There is a bizarre irony at work here: Some of the very same parents who most zealously opposed lockdowns, school closings, and mask mandates, are pushing the hardest to vault their lonely children back into public life without wanting them to actually engage with public discourse at all. They want all the benefits of COVID lockdown—an intellectual monopoly over every idea to which their child is exposed—but with all the social and emotional benefits of public education. That isn’t actually public schooling. It’s cultural indoctrination, taxpayer-funded babysitting in which children learn only the ideas their parents endorse.

This isn’t merely an unwillingness to allow kids to do that which is developmentally appropriate and necessary—to learn ideas that differ from the orthodoxies of their own community. It’s a desperately revanchist claim that anywhere you move in the country is your home, and that you’re entitled to a path through life in which anything foreign or disturbing is hidden away and suppressed because it doesn’t match the window treatments. That isn’t really democracy, it certainly isn’t really public education, and it isn’t really even parenting. It’s colonization, and ironically that’s the very original sin these parents don’t want their children to learn about in the first place.

For more legal analysis and commentary from Dahlia Lithwick, listen to the latest episode of the Amicus podcast.