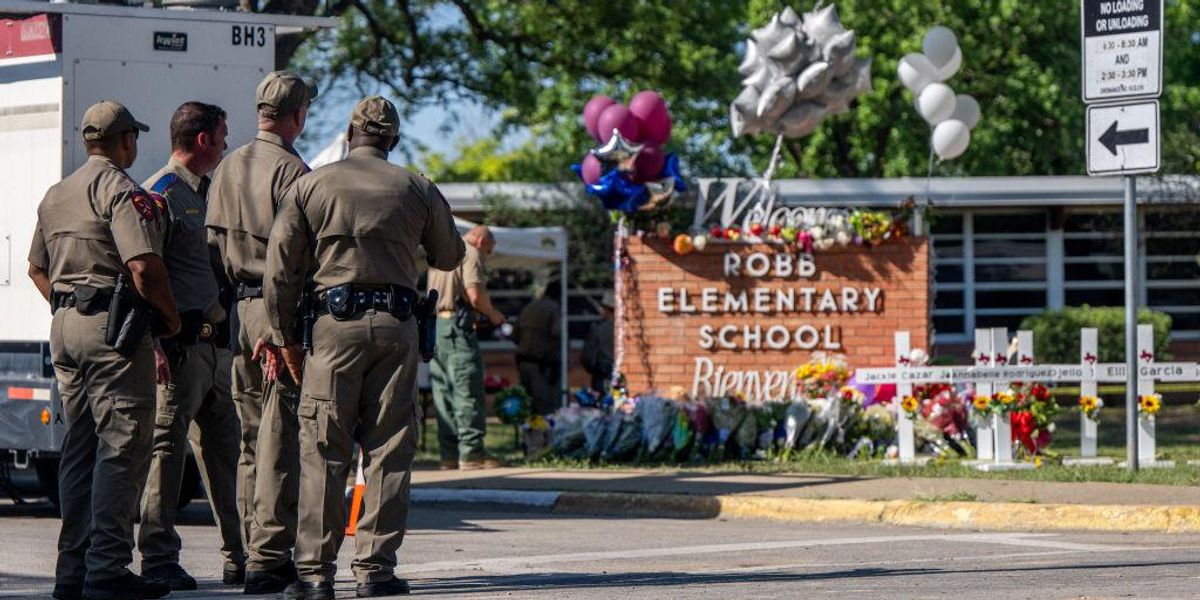 New reports reveal that a Uvalde police officer passed up an opportunity to open fire on the Texas school shooter and that law enforcement never tried to open the classroom door where the gunman was.

The New York Times reported that a Uvalde police officer could have shot Salvador Ramos before he entered Robb Elementary School.

“At least two law enforcement cars arrived in close succession at the school,” according to the New York Times. “One was driven by an officer from the small police force that patrols Uvalde’s schools. Another arrived less than a minute later, at 11:32 a.m., with officers from the Uvalde Police Department.”

At the time, the gunman was reportedly outside the school – firing into the building and toward a funeral home. Responding officers believed the shooter was firing at them, according to Chief Deputy Sheriff Ricardo Rios of Zavala County.

The two officers took cover behind a police cruiser.

“They wanted to return fire, he said, but held off,” the Times stated, adding that one of the officers was armed with a long gun.

Rios said, “I asked him, ‘Why didn’t you shoot? Why didn’t you engage?’ And that’s when he told me about the background. According to the officers, they didn’t engage back because in the background there was kids playing and they were scared of hitting the kids.”

The opportunity to take out the shooter purportedly only had a window of a few seconds.

Rios understood the decision, and added, “The Ranger who took my statement even said: ‘It’s come to the point where we’re second-guessing ourselves shooting somebody because we’re scared. Every bullet has our names.'”

A report from the San Antonio Express-News claimed that police officers never attempted to open the doors at the Robb Elementary School – where the shooter was.

“Surveillance footage shows that police never tried to open a door to two classrooms at Robb Elementary School in Uvalde in the 77 minutes between the time a gunman entered the rooms and massacred 21 people and officers finally breached the door and killed him,” the San Antonio Express-News reported, citing a law enforcement source involved in the investigation. “Investigators believe the 18-year-old gunman who killed 19 children and two teachers at the school on May 24 could not have locked the door to the connected classrooms from the inside.”

That source allegedly said that police may have assumed that the school doors were locked. However, the doors are reportedly only locked or unlocked from the outside.

The report claimed that police officers could have tried to open doors instead of attempting to locate keys to gain entry.

The Texas Tribune previously reported, “The extrication tools never materialized, but Arredondo had also asked for keys that could open the door. Eventually, a janitor provided six keys. Arredondo tried each on a door adjacent to the room where the gunman was, but it didn’t open.”

The San Antonio Express-News reported, “Regardless, officers had access the entire time to a ‘halligan’ a crowbar-like tool that could have opened the door to the classrooms even if it was locked, the source said.”

The Times added, “Ramos entered Robb Elementary at 11:33 a.m. that day through an exterior door that a teacher had pulled shut but that didn’t lock automatically as it was supposed to, indicating another malfunction in door locks at the school.”

The San Antonio Express-News noted, “Police finally breached the door to classroom 111 and killed Ramos at 12:50 p.m. Whether the door was unlocked the entire time remains under investigation.”