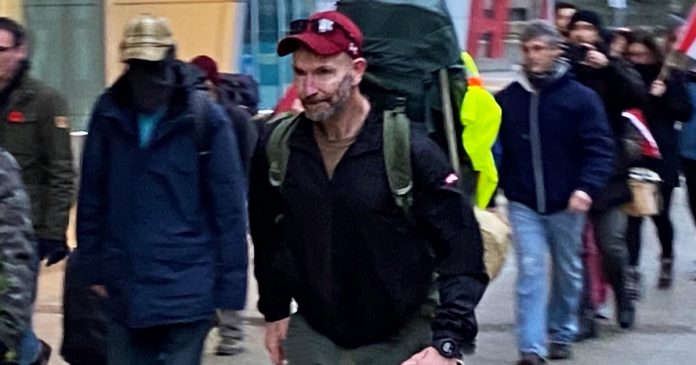 Canadian Armed Forces (CAF) veteran James Topp began his 4395-kilometre march from Vancouver to Ottawa on Sunday morning, departing from the Terry Fox monument downtown in solidarity with the truckers and working Canadians to bring an end to overbearing government mandates.

A crowd of around 100 people gathered outside B.C. Place to cheer Topp onward, offer him small gifts and hear him speak a few words. About 70 people had come to march with him through the streets of Vancouver, while a small handful appeared committed to going the distance to Ottawa.

Asked by True North whether the violent crackdown on Ottawa protesters over the weekend had shaken his resolve, Topp said it has only strengthened him.

A drumming ceremony by Indigenous singers was followed by a singing of O Canada just as dawn broke and the overnight rain gave way to sunshine. Gulls cried overhead.

“Warriors doesn’t mean going to battle all the time,” added Darcy, an Indigenous drummer from Manitoba. “It means keeping our families safe, sacrificing for our families. That’s the essence of a warrior.”

Topp, who served almost three decades with the Canadian Army, told his supporters it was okay to be afraid, and to make peace with it. He urged them to look to the example of Terry Fox, whose monument stood nearby – four statues growing in size to represent Fox becoming larger than life as his journey continued.

“Determination, dedication, perseverance,” Topp urged just before donning his rucksack. “The sounds of our footsteps are going to carry on in front of us. They are going to hear our feet out east.”

Topp made news a week ago when he appeared in full uniform at the Surrey border protest to announce his mission. He declared he would march from Vancouver to Ottawa to send politicians a message that the working Canadians who had built the country did not deserve what the government was doing to them under COVID.

Topp, whose story can be followed on his website CanadaMarches.ca, told True North in an exclusive interview last week that government policies and vaccine mandates had also been devastating for him personally. He said that the Freedom Convoy had given him new belief in his own strength and that of working people.

Calling veterans the guardians of Canada, he used the metaphor of a house to describe how he saw his national responsibility.

“So if we are in a house, and I am the guardian, and inside this house now, we have a spoiled child – a spoiled, entitled child,” he said. “And I’m not just talking about one person. I’m talking about a number of people running around inside the house, knocking stuff over, breaking windows, writing on the walls with crayon, and we as guardians are just watching this with our hands in our pockets.”

“And now, the child has gotten ahold of a box of matches,” he said. “As the guardians, I feel we have to sit that child down and have a talk about who built that house.”

After forming up into ranks, Topp and his followers performed a left wheel and headed north on Beatty Street. Five Canada geese honked as they flew in to land on a nearby high-rise.

By evening, Topp and his crew had walked 50km to Maple Ridge, where Olympian Gym put them up for the night. On Tuesday, he set out for Abbotsford, with plans to reach Hope by Wednesday.

Topp has said he will not accept money, urging any cash donations go to WoundedWarriors.ca. He is, however, looking for places to stay along the route as well as help with other details of the march. Topp’s team can be reached via CanadaMarches.ca and its corresponding Twitter, Facebook and YouTube pages.