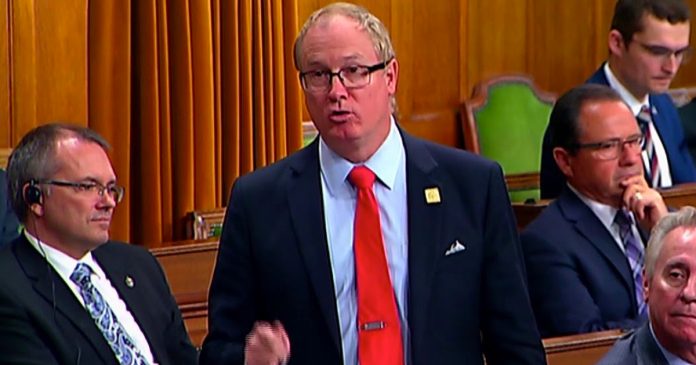 An NDP MP accused Conservative MP Colin Carrie of disinformation in the House of Commons after Carrie asked the Trudeau government a question about the World Economic Forum (WEF) on Saturday.

Carrie said the question had come from a constituent and was related to foreign interference in Canada’s democracy.

“Klaus Schwab is the head of the World Economic Forum, and he bragged how his subversive WEF has “infiltrated” governments around the world,” said Carrie. “In the interests of transparency, could the member please name which cabinet ministers are on board with the WEF’s agenda?”

Before Carrie was even able to finish his question, Deputy Speaker Chris d’Entremont stated that the “audio and video” were really bad.

Before Carrie could repeat the question, however, NDP MP Charlie Angus complained that Carrie “was openly promoting disinformation.”

WEF has been a topic of controversy recently after a 2017 clip resurfaced where WEF head Klaus Schwab bragged about infiltrating governments around the world using politicians sympathetic with his organization’s views.

In the clip, Schwab states that “half of (Trudeau’s) cabinet” were WEF Young Global Leaders.

“I have to say, when I mention now names (sic), like Mrs. (Angela) Merkel and even Vladimir Putin, and so on, they all have been Young Global Leaders of the World Economic Forum,” said Schwab.

The WEF has been a proponent of the Great Reset, which it describes as a global shift towards stakeholder capitalism – a sustainable economic concept developed by Schwab.

According to the Great Reset, capitalism is dead, and every aspect of society needs to be revamped according to notions of diversity, inclusion and sustainability. Proponents of the idea have pushed for what’s called a “circular economy” that privileges renting over ownership, or the idea that you would “own nothing” and be happy.

Prime Minister Justin Trudeau and others have frequently referred to using the COVID-19 pandemic as an opportunity for a Great Reset.