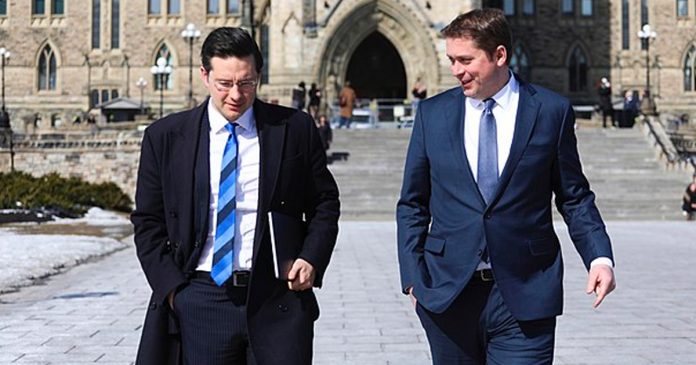 Scheer appeared with Poilievre at a campaign press conference Friday morning, and is set to formally endorse the Conservative MP’s leadership candidacy at an evening rally, a source connected to Poilievre’s campaign told True North.

Poilievre was in Regina announcing a campaign pledge to repeal bills C-48 and C-69, which he characterized as “anti-energy and anti-pipeline legislation that limits Canadian prosperity and enriches dictators abroad.”

Bill C-69 subjects critical infrastructure projects to bureaucratic hurdles that force companies to comply with “a variety of Liberal priorities,” a statement from Poilievre’s campaign says. Bill C-48 is a tanker ban that restricts the export of Alberta oil from the west coast.

During his prepared remarks and in response to several reporters’ questions, Poilievre took aim at former Quebec Liberal premier Jean Charest, who is widely rumoured to be seeking the Conservative leadership himself.

The Conservatives will announce the winner of the leadership race on September 10, the party announced this week after its Leadership Election Organizing Committee settled on the race’s rules. Candidates have until April 19 to enter the race, which gives time for challengers to mobilize.

Poilievre said he wasn’t concerned with the timeline.

“I couldn’t care less,” he said. “Bottom line is I’m the low-tax candidate. I’m the person who will make life more affordable for hard-working Canadians. I’m going to bring down energy costs. I’m going to restore big, powerful pay cheques that will allow people to take back their lives. So it doesn’t matter to me when people vote. If they want a low-tax, pro-paycheque candidate who will put them back in charge of their lives, then I will win the race.”

Poilievre said that if he becomes prime minister, “taxes will only ever go down.”