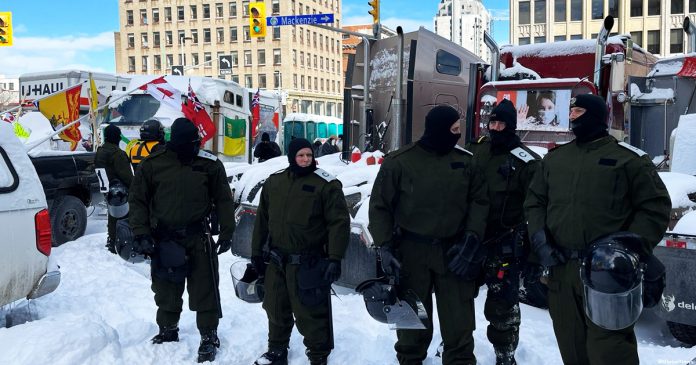 Police have commenced a massive operation to clear downtown Ottawa of peaceful protesters who are calling for an end to COVID-19 mandates.

Yesterday afternoon, police arrested Freedom Convoy organizers Tamara Lich and Chris Barber after all protestors were ordered to disperse from the area or face arrest earlier this week.

A notice distributed to demonstrators on Wednesday warned them to “leave the area now.”

“Anyone blocking streets, or assisting others in the blocking (of) streets, are committing a criminal offence and you may be arrested,” Ottawa Police said.

“You must immediately cease further unlawful activity or you will face charges.”

Both have been scheduled to appear in court on Friday.

True North fellow Andrew Lawton is on the ground reporting on the arrests as they happen.

Police have cordoned off much of the downtown area and have set up 100 checkpoints throughout the city to control who can enter or leave the designated red zone.

Even journalists have been threatened with arrest. According to Fox News contributor Sara A. Carter, reporters were told that their information and plates were being recorded by the Ministry of Transportation.

“Ministry of Transportation has pulled some drivers plates and CVORs. Many drivers received emails this morning stating their commercial vehicle was being used in contravention of the law,” tweeted Carter.

On Monday, Prime Minister Justin Trudeau took the unprecedented decision to invoke the Emergencies Act to deal with the Ottawa protests. The Act gives the government powers to declare protests unlawful and to freeze the bank accounts of those who attend.

The House of Commons was expected to debate the implementation of the Act on Friday, but the Liberal government has reportedly cancelled the debate over the ongoing police action.

The Freedom Convoy entered its 27th day on Friday.