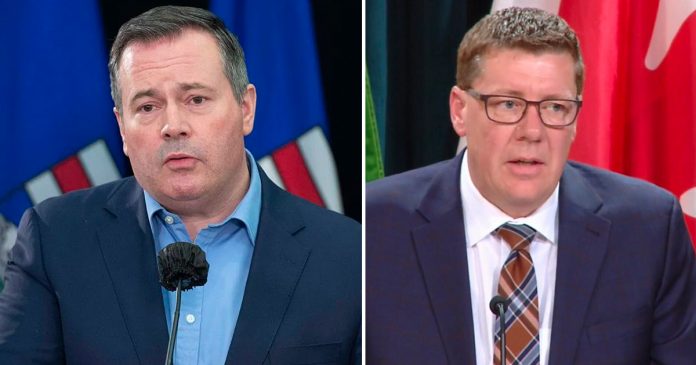 Several premiers have spoken out against Prime Minister Justin Trudeau’s plan to invoke the Emergencies Act to deal with nationwide convoy protests calling for an end to COVID-19 restrictions.

Alberta premier Jason Kenney was the first to speak out against the proposal after a First Ministers meeting Monday. Kenney said that federal emergency powers would not be required for Alberta to deal with the situation.

“This is not necessary, at least for Alberta. We have all the necessary statutory powers and operational capacity for enforcement,” Kenney said.

Kenney added that invoking the Act could further inflame protesters. He said that if Trudeau moves forward with the decision to invoke the Emergencies Act, he would request that it not apply to Alberta.

Some truckers have set up a blockade at the Coutts-Montana border where they have been encamped for several weeks now. After reports of 11 arrests and the discovery of a cache of guns and ammunition at the site, Kenney said the RCMP would move to clear the border protest on Monday.

“The illegal blockades must end, but police already have sufficient tools to enforce the law and clear the blockades, as they did over the weekend in Windsor,” Moe tweeted.

“Therefore, Saskatchewan does not support the Trudeau government invoking the Emergencies Act. If the federal government does proceed with this measure, I would hope it would only be invoked in provinces that request it, as the legislation allows.”

“We do not wish to have a state of emergency in Quebec. It’s not necessary, and it’s time to bring together, not divide,” Legault said on Monday.

Stefanson declared Manitoba’s opposition in a news release, saying “I am not currently satisfied the Emergencies Act should be applied in Manitoba. Winnipeg’s situation is dramatically different from the one in Ottawa. The Emerson border situation is very different than the one faced in Windsor.”

The Emergencies Act – which was legislated in 1988 as a replacement to the War Measures Act – allows the federal government to declare an emergency with the approval of Parliament.

Under the Act, the government would be able to coordinate provincial responses and gain powers to ban public gatherings, requisition public services and issue fines and jail time for those who breach public orders.

“I will support the federal government in any proposals they have to bring law and order back to our province,” said Ford on Monday.

According to legislation, Trudeau does not require the premiers’ approval to invoke the Act.