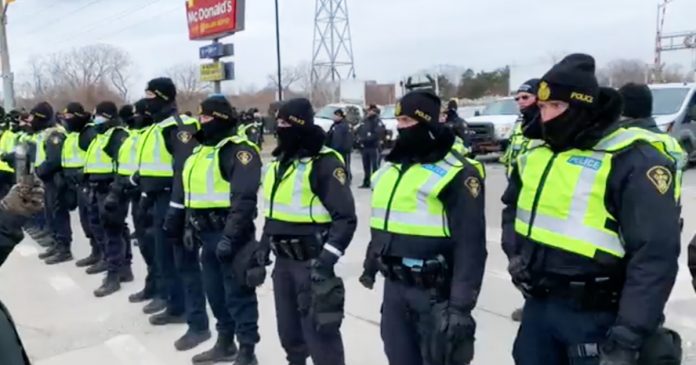 On day 21 of the Truckers for Freedom Convoy, the standoff at the Ambassador Bridge deepened, large crowds returned to Ottawa, thousands gathered at a border crossing in Surrey and protesters in Toronto told True North what they thought of Premier Doug Ford declaring a State of Emergency.

In Windsor, the ongoing standoff intensified after a judge granted Ford’s court order to remove the blockades yesterday. Reports from legacy media outlets confirmed that the crowd at the bridge had grown.

This aerial footage from the standoff was recorded earlier.

Plainclothes police officers spoke with demonstrators, warning them they would be arrested if they did not move.

Despite the increased police presence and threat of massive fines and jail time, demonstrators continued to gather throughout the day.

A crowd near the bridge blockade can be heard singing O Canada.

Later in the day, police began setting up concrete barricades – apparently trying to replace one blockade with another.

As evening settled in, a large crowd of protesters could be seen standing off against police.

Back in Ottawa – at what legacy media still refer to as the “occupation” – a huge crowd of peaceful protesters gathered outside Parliament for the third weekend in a row, demanding the return of their freedoms.

After dismantling a fence that had been set up around the National War Memorial, Canadian veterans gathered at the foot of the Cenotaph to say the Lord’s Prayer and sing O Canada.

It was a powerful moment.

Later on, and in keeping with tradition, the protests turned into a party outside the Parliament Buildings.

Crowds demanded the return of their freedoms.

In Queen’s Park in Toronto, crowds reconvened to continue their protest against COVID restrictions.

True North asked demonstrators in Toronto what they thought about Premier Doug Ford’s decision to declare a State of Emergency on Friday.

Here’s what they had to say.

Meanwhile, four thousand kilometres to the west in British Columbia, another convoy headed from Chilliwack to Surrey to set up a protest at the Pacific Highway Border Crossing.

This was the scene.

Some dancing and revelry. Lots of people with their kids.

Even some of the cops were smiling as vehicles honked their horns. #ConvoyForFreedom2022 pic.twitter.com/JIFcAJpq2j

The Givesendgo set up by the Truckers for Freedom Convoy organizers had reached USD $9,215,624 by the time this article was published.