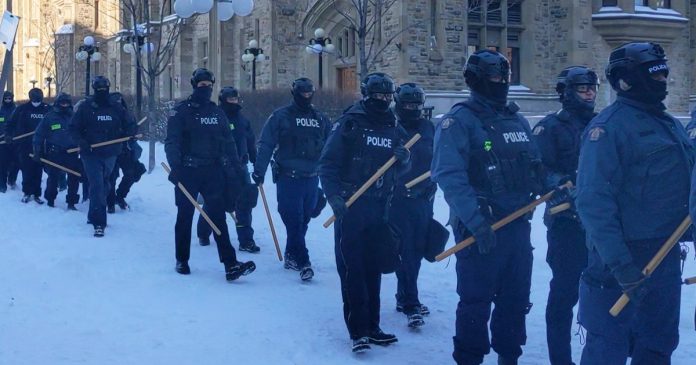 On day 30 of the Truckers for Freedom Convoy, the NDP gave Trudeau the votes he needed to extend the Emergencies Act, Trudeau himself didn’t bother to show up in person and the Liberal public safety minister claimed that police officers showed restraint and professionalism during the violent crackdown on Freedom Convoy protesters over the weekend.

In a historic moment in the House of Commons, Liberals and NDP MPs voted in lockstep to pass the Emergencies Act and extend Trudeau’s use of its unprecedented powers for at least another four weeks.

The extension came despite border blockades already having been cleared across the country and the protests in Ottawa having been crushed.

The final vote was 185 to 151 in favour of passing the Emergencies Act.

Jagmeet Singh and the NDP voted in favour, giving Trudeau’s Liberals the votes they needed to succeed.

All Conservative MPs, Bloc MPs and one Green Party MP – Mike Morrice – voted against the motion.

After the vote had been read, interim Conservative leader Candice Bergen rose on a point of order to immediately introduce a motion to revoke Trudeau’s emergency declaration.

Bergen had obtained the required 20 signatures of members to put the motion forward.

Liberal house leader Mark Holland then rose to say that because the vote was already counted, the House had to adjourn and Bergen’s motion was out of order.

“I say this to all Canadians,” Bergen responded. “Conservatives will continue to use every tool at our disposal to end the Prime Minister’s abusive Emergencies Act.”

Bergen’s mic was then cut off.

Trudeau himself voted remotely, not bothering to show his face in the House during the most consequential vote of his seven-year tenure as prime minister.

Before the vote, Justin Trudeau had held a press conference declaring that his government was going to seek to extend the powers of the Emergencies Act despite border blockades and the Ottawa protests having come to an end.

Trudeau claimed that while his government supported the right to peaceful protests and freedom of expression under the Charter of Rights and Freedoms, change could only happen when people vote or run for office.

In a purely political move, Trudeau also made support of the Emergencies Act a confidence vote on his government. If the vote had failed, it would likely have triggered an election.

“I can’t imagine that anyone who votes no is doing anything other than indicating that they don’t trust the government,” Trudeau said.

After the Prime Minister’s press conference, NDP leader Jagmeet Singh had said that the NDP would be “reluctantly” supporting the motion – a declaration on which he and his party made good a few hours later.

Singh went on to say that the NDP would be pulling their support of the motion as soon as the Emergencies Act  is no longer needed – even though the vote extends the act by another four weeks.

Speaking after the vote in the House of Commons, Trudeau’s Minister of Emergency Preparedness Bill Blair said, “(w)e are in hourly consultation with our officials about the threat that has existed and continues to exist in this country.”

“(W)e undertake that as soon as it’s no longer required, we are prepared to lift those measures”

Meanwhile, Liberal public safety minister Marco Mendicino declared that the conduct of police officers over the weekend was “professional” and that officers showed “restraint.”

Deputy prime minister Chrystia Freeland also spoke today, addressing concerns that people who had merely donated to the Freedom Convoy – even before the Emergencies Act had declared it illegal – were seeing their bank accounts frozen.

“The way to get your account unfrozen is to stop being part of the blockade and occupation,” she said – despite the Ottawa protests having ended and all blockades having been cleared across the country for almost a week.

The Givesendgo set up by the Truckers for Freedom Convoy organizers had reached USD $9,732,208 by the time this article was published.