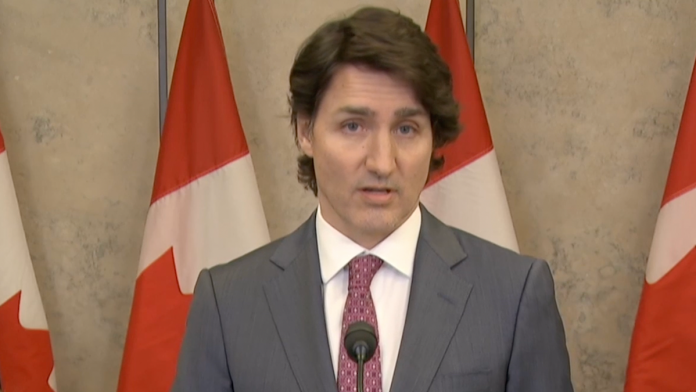 Prime Minister Justin Trudeau and the Liberal cabinet invoked the Emergencies Act on Monday afternoon to crackdown on peaceful protests against COVID-19 measures across Canada.

This was the first time in Canadian history that the law has been implemented since it replaced the War Measures Act in 1988.

According to Trudeau, using the Act is necessary to give the federal government and law enforcement more powers to break up the protests including by securing airports and border crossings.

It will also allow the government to seize essential services like towing trucks to remove trucks in Ottawa and elsewhere.

“There’s a high level of frustration that this situation has gone on as long as it has,” said Trudeau.

“Those people have gone from protesting and disagreeing with those (COVID-19) measures, to limiting and blocking the freedoms of their fellow citizens.”

Although the prime minister said that the powers would be limited geographically he did not specify which areas would be subject to the regime but did say that provinces would not be able to opt-out.

Several premiers have spoken out against using the Emergencies Act including Quebec Premier Francois Legault and Alberta Premier Jason Kenney.

According to deputy prime minister and finance minister Chrystia Freeland, the Act will also allow financial institutions to freeze bank accounts of truckers involved in the protest and for their insurance to be canceled.

We are broadening the scope of Canada’s anti-money laundering and terrorist financing rules so that they cover crowdfunding platforms and the payment service providers they use. These changes cover all forms of transactions including digital assets such as cryptocurrencies,” said Freeland.

Into their third week, peaceful protestors have assembled in various cities and locations including Ottawa, Vancouver, Calgary and Windsor.

As per the law, the federal government now has seven days to table a plan to Parliament which will require approval from both the House of Commons and the Senate.