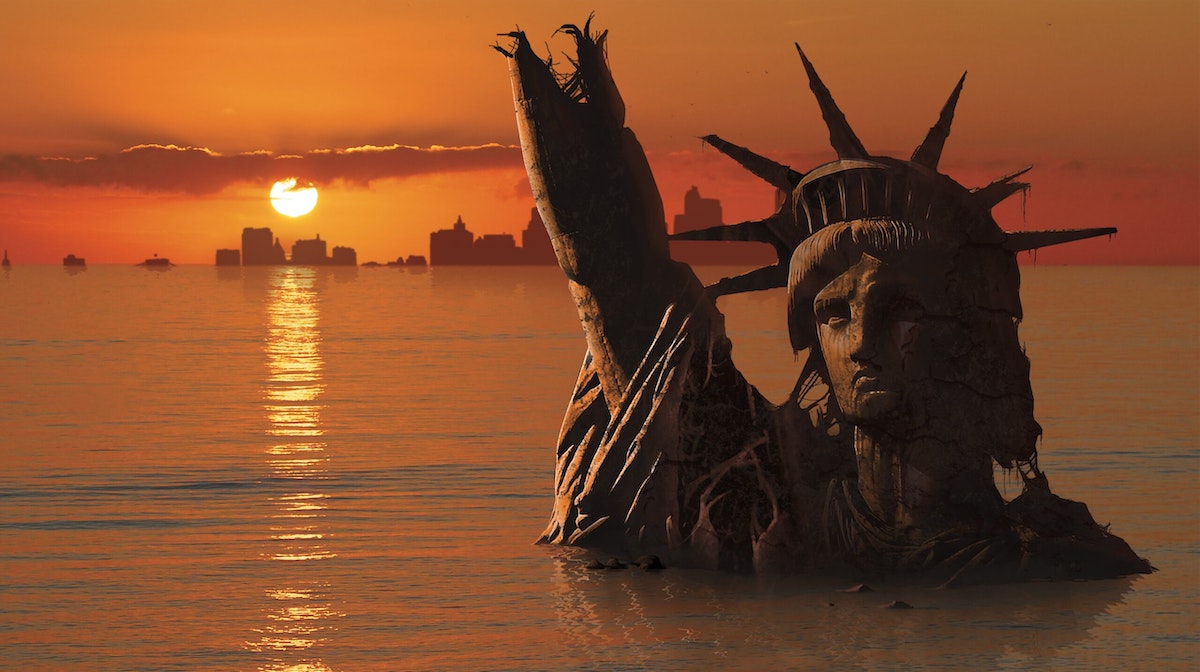 What toxic forces and pernicious ideas have brought American citizenship — a 233-year-old idea able to transcend the conditions of its birth and accept women and those of races and ethnicities different from the majority culture fully into the political commonwealth — to the brink?

Today the modern suburban everyman is becoming a nostalgic ideal rather than a vibrant reality. Indeed, the American middle class has lost economic ground for nearly a half century through mounting household debt, static wages, and record student-loan burdens. Without a middle class, society becomes bifurcated, splintering into one of modern masters and peasants. In that situation, the function of government is not to ensure liberty but to subsidize the poor to avoid revolution and to exempt the wealthy, who reciprocate by enriching and empowering the governing classes.

States must also privilege citizens over mere residents. Citizens live within delineated and established borders. They share a common history. Their sacred physical space allows them to pursue their constitutional rights without interference from abroad. Living on common and exclusive ground encourages shared values, assimilation, and integration and defines national character.

Yet we now live in an increasingly borderless world — as if, in an age of affordable and rapid travel, an accident of birth should not deprive any of the planet’s eight billion people from entering and living in the United States. Citizenship, however, is not indestructible. The more it is stretched to include everyone, the less the likelihood it can protect anyone.

All Americans should give up their own ethnic, racial, and tribal primary identities. Only through such a brutal bargain of assimilation can they sustain a common culture in a century in which superficial racial and tribal differences, the fuel for many of history’s wars, are recalibrated as essential to the American character. Yet in the absence of a collective civic sense of self, the inclusive idea of an American citizen wanes and fragments.

Once any nation goes tribal, however, eventually even those without easily identifiable ethnic ancestries or tribal affinities seek to reconstruct or invent them — to protect themselves from the inevitable violence and factionalism on the horizon. Once a person owes more loyalty to his first cousin than to a fellow citizen, a constitutional republic cannot exist.

Yet there are even greater dangers to citizenship than these premodern forces and they are posed by a relatively small American elite. “Postmodernists” feel the United States should conform to a European and cosmopolitan ethos rather than pride itself in being “exceptional.” They are well versed in the Constitution and therefore write eloquently about how it should be modified and its essence irrevocably changed to birth a truly direct equality-of-result democracy. Larger government and a more commanding administrative state should guarantee a mandated “equity.”

An unelected federal bureaucracy has absorbed much of the power of the US Congress, yearly creating more laws and regulations than the House and Senate together could debate, pass, and send to the president for signing.

Elected officials come and go. They proverbially rant about the “deep state.” But the bureaucracy outlasts all, knows best, and so grows and breeds, often at the expense of the citizen. We are reaching a point similar to the rise of a fictive robotic terminator that destroys its too human creators, as the bureaucratic elite believes that it can and should preempt any elected official who deems it dangerous. If the citizen cannot elect officials to audit, control, or remove the unelected, then he has lost his sovereign power.

Unapologetic grand architects of dismantling constitutional citizenship are inordinately represented by political activists, media grandees, the legal profession, and academics. As progressives, they feel Americans are currently stymied by an eighteenth-century constitutional albatross strung around their necks, one far too redolent of old, white, male, Christian values that supposedly have no relevance today. They accuse the Founders of lacking our modern wisdom, today’s enlightened education, and the benefits of a constantly improving, innate human nature.

The evolutionaries are not shy in explaining why the Constitution, along with centuries-old traditions that followed from it, are now either inert or obstructive or both. We must formally scrap and replace many such fossilized concepts and even founding documents, they insist, from the Electoral College to the Second Amendment to the Senate filibuster to a nine-person Supreme Court to two senators for every state. If perceived as impediments to mandate equality, then current calcified rules can be changed or eliminated altogether.

Globalism — an ancient but unworkable idea of cosmopolitanism — has reemerged, now driven by privileged utopians empowered by twenty-first-century global travel, finance, and communications. In the cynical sense, they rarely suffer from the real consequences of their own impractical ideas, given that their American-generated power, wealth, and influence largely exempt them from their edicts — be they overregulating the economy in pursuit of environmental agendas or sacrificing the interests of American workers to foreign commercial and trade predation.

On the one hand, globalists are cynical critics of American exceptionalism and nationalism. On the other, they wish to extend American-style democracy and liberal tolerance across the globe — but without much thought about where such singular ideas arose or why so much of the world has always resisted them.

Globalism’s chief characteristic, however, is more mundane. Its architects focus on the distant and anonymous abroad, less so on concrete Americans nearby — as if theorizing about such misdemeanors as the use of plastic bags or natural gas use abroad can compensate for the failure to address the felonies of American homelessness, eroding wages, drug epidemics, and crushing student debt in their midst. In the end, globalization may not westernize the planet so much as internationalize America.

In sum, I wish to explain why everything that we once thought was so strong, so familiar, and so reassuring about America has been dissipating for some time. The years 2020-1, in the manner of other revolutionary eras, such as 1848, 1917, and 1968, has peeled away that veneer of complacency and self-satisfaction. Contemporary events have reminded Americans that their citizenship is fragile and teetering on the abyss — and yet the calamities can also teach, indeed energize, them to rebuild and recover what they have lost.

Excerpted from The Dying Citizen: How Progressive Elites, Tribalism, and Globalization Are Destroying the Idea of America by Victor Davis Hanson. Copyright © 2021. Available from Basic Books, an imprint of Hachette Book Group, Inc.

Victor Davis Hanson is Professor of Greek and Director of the Classics Program at California State University, Fresno. He is the author or editor of many books, including Who Killed Homer? The Demise of Classical Education and the Recovery of Greek Wisdom (with John Heath, Free Press, 1998), and The Soul of Battle (Free Press, 1999). In 1992 he was named the most outstanding undergraduate teacher of classics in the nation.